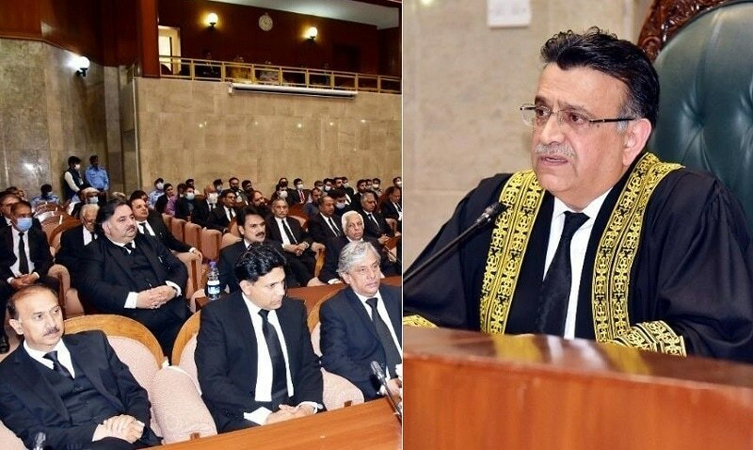 Chief Justice of Pakistan (CJP) Justice Umar Ata Bandial Monday said the Supreme Court (SC) had taken suo motu notice of the parliamentary crisis last month after in-depth consultations among 12 SC judges and they all agreed that it was a ‘constitutional matter’. Following the dismissal of a no-confidence motion by the then deputy speaker National Assembly Qasim Suri submitted against the then prime minister Imran Khan and the subsequent dissolution of the assembly, the chief justice had taken a suo motu notice of the matter and made it clear that all orders and actions taken by the prime minister and president concerning the dissolution of the National Assembly will be subject to the court order, which eventually went against the then government and restored the assembly. The Supreme Court’s notice was criticised by the PTI lawmakers, with Fawad Chaudhry terming it “unfortunate”. The chief justice, however, maintained on Monday that the notice was justified. “Everyone believed that it was a constitutional matter so notice should be taken.” Justice Bandial made these remarks during the hearing of a presidential reference seeking the top court’s opinion on Article 63-A of the Constitution, which is related to the disqualification of lawmakers over defection. A five-member bench, headed by the chief justice, and comprising Justice Ijazul Ahsan, Justice Mazhar Alam Khan Miankhel, Justice Munib Akhtar and Justice Jamal Khan Mandokhail, is hearing the reference.

Justice Bandial further remarked that the suo motu notice was taken at the bench’s discretion and not on anyone’s wishes, says a news report. The chief justice remarked that it was the court’s duty to protect the Constitution, adding that interpretation of Article 63-A was essential for parliamentary democracy. Justice Bandial said legal questions related to the Article were valid even after filing of references against the dissident PTI lawmakers with the Election Commission of Pakistan (ECP).

Justice Ahsan observed that all parties would be bound to respect the court’s decision.

The PML-N had earlier filed an application, requesting the court to put off the hearing till May 17 since the party’s counsel, Makhdoom Ali Khan, would be out of the country till then.

When the hearing resumed, the chief justice directed that Khan be asked to return to the country sooner.

Meanwhile, PTI’s counsel Babar Awan said he wanted to assist the apex court in the case, adding that he ‘greatly respected’ the court.

Justice Mandokhail remarked that the same respect should be spread among the public.

Awan replied that it (having the public respect the judiciary) was the information ministry’s job, arguing that Articles 62 and 63 should be read together.

Following his ouster, PTI Chairman Imran had, in a rally on April 13, asked the judiciary to explain why it felt the need to open its doors at midnight on April 12, hours before voting on the no-confidence motion took place.

The IHC has since explained that “as a constitutional court, it ensures that cases relating to extreme urgency are presented at any time after the notified timings.”

The high court’s decision to resume court activity at the unusual hour came after a pre-emptive petition was filed asking the court to restrain Imran from de-notifying Gen Qamar Javed Bajwa as chief of the army staff. The then government had denied having any such plans.

The court had to interpret the Article for future generations, the CJP remarked.

He observed that while an MNA’s seat could become vacant under Article 63 (related to disqualification over defection) and Article 64 (related to resignation), but they were not similar.

The court had to determine the purpose of the Articles, he noted, adding that it had to look at constitutional principles rather than individual actions.

The Supreme Court was not concerned with the 25 dissident lawmakers of the PTI, Justice Bandial said.

He asked Awan why his client (PTI) did not submit an application if the party was concerned over non-implementation of the apex court’s opinion about the Senate elections.

“There is a difference between the court and the executive.”

The court decides after an incident has taken place whether it was right or wrong, he observed.

Justice Bandial remarked that the executive had “failed” to fulfill its responsibility in the Reko Diq case.

He again said if someone wanted to bring a matter to the court’s attention, they should file an application.

Awan responded that it was not his client’s but the ECP’s “failing” that the SC’s opinion on Senate elections was not implemented.

The chief justice then asked Awan to show any application that had subsequently been filed by the PTI.

Awan said President Dr Arif Alvi had remained silent even after the Lahore High Court (LHC) “made derisive observations” against him.

He was referring to the remarks made by a single bench of the LHC – which were later suspended – in a case related to Hamza Shehbaz’s oath-taking as Punjab chief minister.

In his order, Justice Jawad Hassan observed: “Both the decisions of this court despite having binding effect have been ignored deliberately by the president of Pakistan as well as by the governor of the Punjab. The governor through his conduct has also made himself ‘impracticable’ for the oath to be made before him.”

Later, a division bench of the high court had suspended the observations while hearing an intra court appeal filed by the PTI.

Chief Justice Bandial asked Awan to submit an application if the observations regarding the president were incorrect.

Meanwhile, the court also issued notices to respondents on a petition filed by Imran seeking a lifetime ban from contesting elections for defecting lawmakers.

The petition named the ECP, NA speaker, Federation of Pakistan through the secretary cabinet division, and secretary of the ministry of law and justice as respondents.

The incumbent government was considering withdrawing the presidential reference which was why it was waiting for the new attorney general, MQM-P’s lawyer, Azhar Siddique, said.

Justice Bandial responded that he hoped the federal government would allow the article’s interpretation to be completed.

Previously, the SC’s opinion on the presidential reference related to Senate elections was not implemented, Siddique contended, adding that he had repeatedly written to the ECP in this regard.

“Political parties are reluctant to implement the decisions on presidential references,” the MQM-P counsel said.

Justice Ahsan observed that the court’s decision of blocking the Hasba bill proposing the appointment of an ombudsman for enforcing ‘Islam’s morality code’ which was taken on a presidential reference had been implemented.

Everyone has to implement the decision on a presidential reference, he added.

The chief justice observed that the court had not received any application related to non-implementation of the decision, adding that an appropriate verdict would be announced if one was received.

Subsequently, the hearing was adjourned till Tuesday (today).