* The book travels to a New York brewery-turned-theatre, a landmark of London's West End, a fantastical floating stage in Austria and an opulent Parisian performance space 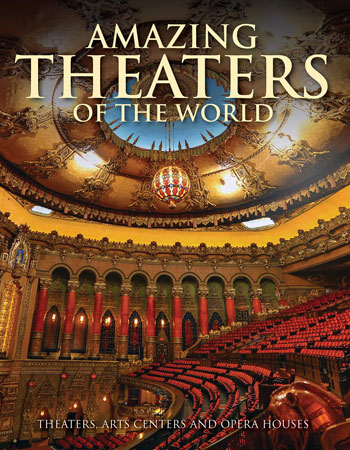 Books don’t get more dramatic than this. Amazing Theatres of the World: Theatres, Arts Centres & Opera Houses, written by Dominic Connolly and published by Amber Books, is an ‘opulent pictorial celebration of the world’s greatest theatres’.

Packed with 190 photographs, the fascinating tome recounts the stories behind more than 150 theatres, playhouses and opera houses.

The book travels to a New York brewery-turned-theatre, a landmark of London’s West End, a fantastical floating stage in Austria and an opulent Parisian performance space.

In the introduction to the book, Sir Time Rice, the lyricist who co-wrote hit musicals such as Amazing Technicolor Dreamcoat and Evita, says: ‘The love of theatre spans cultures – every society cherishes performance in a communal setting. And it also spans time. The earliest civilisations built phenomenal structures where people could gather together and be entertained, auditoria that often still survive as working theatres. And today the most hi-tech and ambitious methods are being employed to create theatrical spaces for the present and the future.’

He adds: ‘Dominic Connolly, in this striking and original work, has superbly demonstrated the power and magic of theatre, which transcends the performance on stage, no matter how brilliant that may be, through the fourth wall and beyond.’

NATIONAL ACADEMIC THEATRE, ODESA, UKRAINE — book says of this grand theatre: ‘When the original 1810 building was gutted by fire in 1873, fundraising began for a replacement and the 1878 Dresden Semperoper was the template chosen for the new design.’ Author Connolly observes: ‘The current building opened in 1887. In those days, summer audiences were kept cool by wagonloads of ice and straw unloaded into a basement under the hall.’

ESPLANADE, SINGAPORE — ‘This arts centre – also known as Theatres on the Bay – is made up of two rounded glass domes, which locals dub the “durian” as it resembles the spiky fruit that is native to the area. The space features the 1,600-seater Concert Hall, where the Singapore Symphony Orchestra regularly performs,’ the book reveals. It adds that the theatre opened in 2002, having taken six years to build.

TEATRO OLIMPICO, VICENZA, ITALY — ‘This was the first indoor playhouse made of masonry in the world, designed by Andrea Palladio between 1580 and 1585,’ the tome reveals. Offering insight into the fate of the theatre’s architect, Connolly writes: ‘Palladio died six months into the work schedule. The architect – who trained as a stonecutter and who was heavily influenced by Ancient Roman buildings – is now best known for his “Palladian” villas of northern Italy.’

THE OLD VIC, WATERLOO, LONDON — ‘Across the Thames from the West End stands a theatre that has become known by its nickname, rather than its original 1833 title, the Royal Victoria Theatre,’ writes Connolly. He continues: ‘When Shakespearean actor Edmund Kean ventured “south of the river” to The Old Vic, he said: “I have never acted to such a set of ignorant, unmitigated brutes as I see before me.”‘

PALACE THEATRE, WEST END, LONDON — Connolly reveals: ‘For almost 20 years, Les Miserables played at this Cambridge Circus landmark, becoming synonymous with the West End venue. Yet when it opened, in 1891, it was an opera house.’ He continues: ‘Unfortunately, its owner, Richard D’Oyly Carte, had no operas to fill it so, within a year, it was converted into a music hall and renamed the Palace.’

ROMAN THEATRE, CARTAGENA, SPAIN — ‘The Roman Theatre in this city in the south of the country was unearthed in 1988 during construction work,’ the book reveals. ‘In the 3rd century, a market had been built on top of it, reusing its materials, and in the 13th century, Cartagena’s Old Cathedral was laid over part of the seating section.’ The tome notes that the theatre’s restoration was completed in 2003 and performances are held there today.

NATIONAL THEATRE, SOUTH BANK, LONDON — the book explains that this ‘iconic’ building ‘opened in 1976, with Albert Finney playing Hamlet on the Lyttelton stage, one of the three venues in the complex’. Connolly reveals: ‘Hamlet had also been the launch play 13 years earlier, with Peter O’Toole in the title role, when the National Theatre Company was founded at The Old Vic, while the new venue was in gestation.’

ROYAL EXCHANGE, MANCHESTER, ENGLAND — the theatre pictured is housed inside the Royal Exchange, a building that, ‘until 1968, was a world centre for the cotton trade’. There is even a board on display with closing trading figures, the book reveals. Connolly notes that the theatre was built in an ‘in-the-round’ style, meaning the audience encircles the stage. The author says: ‘At 150 tons, the seven-sided theatre itself is too heavy to sit on the floor of the Royal Exchange so it is suspended from four of its enormous columns.’

DUBAI OPERA, UNITED ARAB EMIRATES — Connolly explains that this 2016 building is shaped like a dhow – a type of sailing vessel with one or two masts – ‘in a nod to the area’s maritime past’. He continues: ‘Internally, it can transform from a theatre to a concert hall to a “flat floor” event or banqueting space. Its rooftop restaurant has views over the Dubai Fountain and the Burj Khalifa.’ The author also notes that the auditorium can seat up to 2,000 people.

HARBIN GRAND THEATRE, NORTHEAST PROVINCE OF HEILONGJIANG, CHINA — ‘Clad entirely in aluminium panels, this venue is designed to appear to the naked eye as consisting of swoops and swirls,’ Connolly explains. He notes that Harbin, the city in which the theatre is located, ‘is a Unesco-listed “City of Music” and where China’s first orchestra was established’. The book adds that the Grand Theatre itself ‘consists of several performance spaces.’

PALACIO DE BELLAS ARTES, MEXICO CITY, MEXICO — Connolly writes: ‘This landmark contains not just the country’s National Theatre but its National Museum of Architecture, halls for sculpture and paintings, and murals by the likes of Diego Rivera.’ According to the book, the building was ‘completed in 1934 having been commissioned in 1910 to celebrate the centenary of Mexico’s independence from Spain, missing its deadline by 13 years.’

ODEON OF HERODES ATTICUS, ATHENS, GREECE — ‘This Roman theatre was completed in 161 CE and stands on the Acropolis. It was built by the public benefactor Herodes Atticus and in its original form it would have had a cedar roof and a three-storey facade of arches,’ the book explains. The theatre has hosted some famous faces in the past – according to the tome, ballerina Margot Fonteyn, ‘diva’ and opera singer Maria Callas and the singer Liza Minnelli have all appeared on its stage.

REZO GABRIADZE PUPPET THEATRE, TBILISI, GEORGIA — ‘The theatre, located in the old town of the Georgian capital, is the brainchild of artist Rezo Gabriadze, who turned to puppets to express himself under the strictures of the Soviet Union,’ the book reveals. Describing one of the performances in the puppet theatre, Connolly writes: ‘The Battle of Stalingrad – with mini tanks advancing to the strains of Shostakovich – is one of the feats attempted by this “marionette house.”‘

In the introduction to the book, Sir Time Rice, the lyricist who co-wrote hit musicals such as ‘Amazing Technicolor Dreamcoat’ and ‘Evita,’ says, ‘The love of theatre spans cultures — every society cherishes performance in a communal setting’

CHERRY LANE THEATRE, WEST VILLAGE, NEW YORK CITY — ‘This building was first erected as a brewery in 1836, then a tobacco warehouse and then a box factory,’ the book notes, adding that ‘before all that there had been a silo, when this Greenwich Village gem had been part of a farm’. Connolly reveals: ‘In 1923 it was converted into a playhouse and works by the likes of F Scott Fitzgerald, TS Eliot and Joe Orton have been performed there.’

TEATRO COLON, BUENOS ARIES, ARGENTINA — describing this spectacular site, the book says: ‘Foundation stone was placed in 1890, with the intention that the building would be finished in 1892, to mark four centuries since Christopher Columbus arrived in America. The current building was inaugurated in 1908 and took 18 years to construct.’ Connolly adds: ‘The theatre produces its shows from scratch, from workshops located in its basement.’

VIENNA STATE OPERA, VIENNA, AUSTRIA — ‘This monumental edifice opened in 1869, yet neither the architect nor interior designer were alive to be there,’ Connolly reveals, explaining: ‘August Sicard von Sicardsburg, who designed the structure, had taken his own life, and his colleague, Eduard van der Null, was killed by a stroke.’ He adds that today, ‘this lasting institution has the largest repertoire of any opera house in the world.’

SYDNEY OPERA HOUSE, AUSTRALIA — sharing the story behind the Sydney Opera House’s construction, Connolly writes: ‘It is one of the most recognisable buildings in the world, but its architect, Jorn Utzon, left Australia midway through construction, never to return to see it completed, after the Dane fell out with the Minister for Public Works, Davis Hughes.’ He adds: ‘Construction had begun in 1959 and the house was finally opened in 1973.’

NATIONAL CENTRE FOR THE PERFORMING ARTS, BEIJING, CHINA — ‘Described as The Great Egg, this centre is the largest performing arts complex in Asia and forms the world’s largest dome,’ author Connolly says of this striking building. According to the book, the building has 10 storeys, ‘which extend underground so as not to make the building higher than the Great Hall of the People’ – the 65m-high building in Bejing’s Tianmen Square that’s used by the government of the People’s Republic of China and the Chinese Communist Party. The theatre is ‘surrounded by a lake, with the audience entering the performance hall via an underwater passage’, the book adds.

DELACORTE THEATER, NEW YORK CITY — ‘This open-air venue in Central Park staged its first play in 1962 – The Merchant of Venice, with George C. Scott and James Earl Jones,’ Connolly reveals. He continues: ‘Established with money from magazine publisher George T. Delacorte Jr and his wife Valerie, the theatre is best known for its free productions of Shakespeare plays, a summer tradition in the Big Apple.’

ROMAN AMPHITHEATRE, VERONA, ITALY — this Roman amphitheatre has held a summer opera festival every year since 1913, the book reveals, apart from breaks for the two world wars and one virtual show in 2020 due to the COVID pandemic. Connolly writes: ‘In ancient times, it could hold 30,000 people, reduced to 15,000 today. The structure is made from white and pink limestone from the wine region, Valpolicella.’