Unproven until given a chance 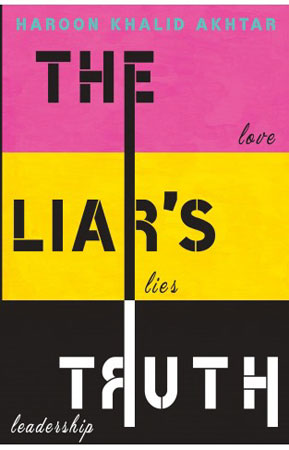 Imagine a scenario where a layman – someone who doesn’t have an iota of sense to run a public office – is selected as a prime minister of a country. Haroon Khalid Akhtar’s novel, The Liar’s Truth, is about such a man – Arsalan. He is an inexperienced citizen who is asked to lead his country as the premier.

Whether this is a predicament or a challenge – the readers will find out.

If Arsalan is a naïve citizen unaware of his duties and the professional decorum he needs to follow under his newfound status, then his team is also oblivious of how to perform various activities. It is indeed an uphill task Arsalan and his team needs to manoeuvre across. Haroon’s smooth storytelling keeps the readers anchored in the narrative as they remain curious about how Arsalan will overcome the challenges.

Interestingly, if Arsalan is a layman – an ordinary citizen – then his team is also a group of common citizens. There is a singer known as Mirasi Adeeb who is accompanied by a matchmaker, a scientist, an ambulance driver, and a gorgeous model. Despite being the PM, Arsalan has to prove himself innocent in a scheme where is lover is being blamed to be a spy.

Mustansar Hussain Tarar praises Haroon’s writing style in the foreword. He writes, “By creating The Liar’s Truth, Haroon no doubt emerges as a major novelist. I feel the success of his second venture is due to his genetic mutation. While leafing through his novel, at times I felt that I know this beloved style and then I realized that it was Mohammad Khalid Akhtar’s unparalleled wit and subtle humour.” The Liar’s Truth has also received praise from Muneeza Shamsie, Javed Jabbar, Harris Khalique and Nadeem Farooq Paracha.

Indeed, it is Haroon’s delicate humor that he has placed here and there in the narrative that gently emerges to amuse the readers. The combination of wit, satire and humour is adroitly balanced throughout the novel. One will not go into a laughing frenzy but will be left amused because of how Arsalan and his colleagues manage to perform activities. Similarly, one will not find the satire to be dumped upon their consciousness but will see it as a reflection of our political fabric.

Haroon’s writing expression will indeed win the readers’ hearts. It is simple yet keeps the story moving despite the presence of several characters.

Comprising fourteen chapters, The Liar’s Truth is not just a story – it may be read as a case study. Haroon writes in the novel a fact that is unfortunately present in our society. “Chaos is not new to this country. We are good at inventing it both at domestic as well as at industrial scale. Besides, as a nation, we are getting better at hating one another all the time.” Moreover, the first line of the opening chapter reads, “This country’s history is being forced to repeat itself, by hook or by crook.”

The readers may realise that fiction and fact may not be too different after all after they will make parallels to the events unfolding in the novel and by examining the political turbulence that we witnessed in Pakistan during the last couple of years and most recently earlier this April.