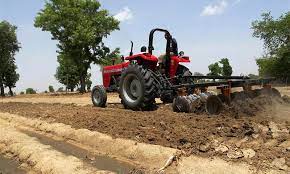 LAHORE: Federal Minister for Industries and Production Syed Murtaza Mahmud Monday promised to discuss the issues being faced by the tractor industry with relevant ministries so as to resolve them at the earliest. He held a meeting with Millat Group Chairman Sikander Mustafa Khan, Chief Executive Officer Irfan Aqueel and senior directors at the offices of Millat Tractors Limited (MLT).

The minister was informed about the issues being faced by the tractor industry, especially the latest SRO 563, which was feared to force closure of the industry.

Syed Murtaza was apprised that the MTL had a market share of more than 60 per cent which represents its customers’ satisfaction and trust in its quality, while the company has also expanded its products range.

The minister appreciated the MLT efforts for achieving more than 90 per cent deletion level in tractors, resulting in saving of precious foreign exchange reserves.