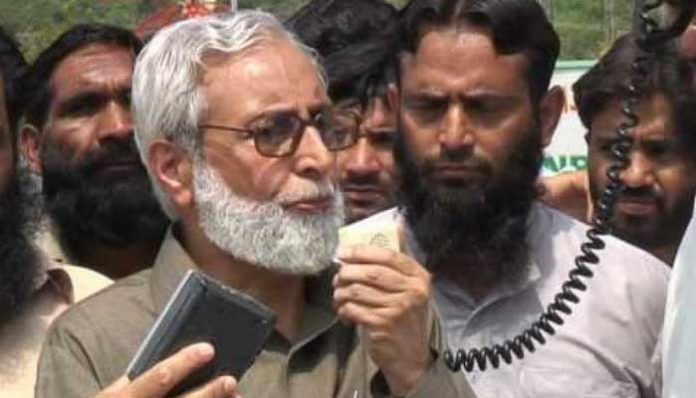 According to Kashmir Media Service (KMS), Muhammad Farooq Rehmani in a statement issued in Islamabad said, India is hell-bent on changing the nature, culture and demographic character of Jammu and Kashmir in total disregard to all the UN resolutions,

international law, bilateral and international agreements and above all the wishes of its besieged and oppressed people and was going to thrust a BJP Chief Minister through its own Delimitation Commission’s recommendations, to further its colonial settler-policy of Indian Hindutva colonialism.

He categorically denied India’s accusations of terroristic activities by youth in J&K, saying Indian agencies—NIA and SIA were propagating and manuevering fake encounters to defame, torture and implicate youth in false cases while the reality was different”.

There were thousands of kashmiris in almost every police station, interrogation centre, and central and sub-jail of Jammu and Kashmir including India’s and dismembered State’s far-flung District jails.

He asked if the kashmiris were voluntarily with India, why such a large number had been incarcerated and why daily and nocturnal crackdowns are carried out by the police everywhere and youths were tortured and forced to false confessions.

He said Indian authorities are treating Kashmiri detainees like convicts for crimes they had never committed or believed in criminal activities to advance their viewpoint on the right of self-determination.

Muhammad Farooq Rehmani urged world organisations to visit the turbulent and choked region of Jammu and Kashmir, meet with politicians and workers, see politicians and workers in jails and notorious interrogation centres and check their status and know-how they were arrested and what allegations had been thrust on them.

The police and jail authorities should be asked to permit uninterrupted meetings with the political inmates whom the Indian rulers call terrorists in their speeches”. He said Indian rulers are governing Jammu and Kashmir by the power of guns, bullets and with about a million regular armed forces equipped with the most sophisticated weapons, while draconian laws enacted by India over decades were giving them superiority over the innocent and unarmed Kashmiris to strangulate and choke their voices and simultaneously enter their homes for search operations with or without pretensions and accusations.

Lastly, Muhammad Farooq Rehmani said that the Modi’s racist government, having accepted the recommendations of the so-called delimitation Commission, may hold farce elections in J&K to declare the ruling BJP of India as its winner and thus J&K would be another BJP led state to accomplish the task of Hinduising the Muslim majority Jammu and Kashmir.