A temporary Hassanabad Bridge to be installed in Hunza within a month: NHA 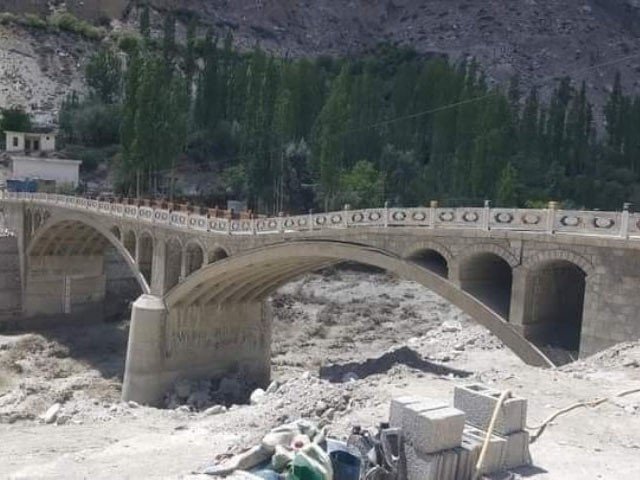 GILGIT: The National Highway Authority (NHA) has announced the installation of a temporary bridge at Hunza’s Hassanabad after an RCC bridge was swept away by a glacial lake outburst flood (GLOF).

Chief Secretary of Gilgit-Baltistan (G-B) Mohyuddin Wani on Sunday assured that the situation, post the Glacial Lake Outburst Flood (GLOF) at Hassanabad, is under control and being managed by the district administration.

Following the directives of Prime Minister Shehbaz Sharif, the NHA chairman along with engineers paid an emergency visit to the site of the affected Hassanabad bridge in Hunza Valley.

The NHA spokesperson said that the Hassanabad bridge was completely destroyed, whereas, the government decided to install a temporary bridge within a month.

The construction of a new bridge in Hassanabad will be completed within six to eight months, said the spokesperson, adding that the NHA experts started design work for the new bridge.

It is to be noted that the RCC bridge constructed in Hassanabad village of Gilgit’s Hunza Valley had collapsed after the scaffolding due to water flow from a glacier.