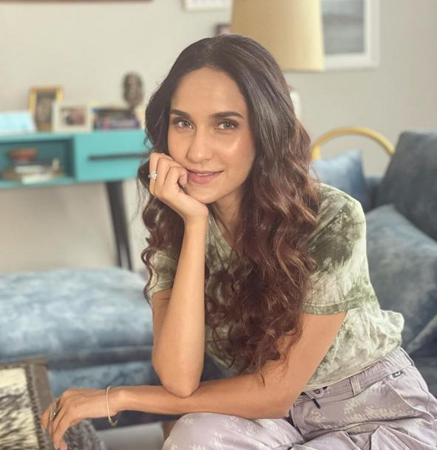 Anoushay Abbasi shared a series of pictures and video for showing support to Hollywood star Amber Heard in the defamation case against former husband Johnny Depp and they are viral.

The Pyaray Afzal star posed for the viral pictures while dressed in a greenish top with pants. She posted a video of pink flowers.

“Team Amber Heard,” the caption read. However, she wrote that it was irrelevant.

The pictures got thousands of likes from netizens and actor Hira Mani wrote, “I miss this girl”.

It is pertinent to mention that Johnny Depp filed a defamation suit against Amber Heard over a column she wrote for The Washington Post in December 2018 in which she described herself as a ‘public figure representing domestic abuse’.

Amber Heard never named Johnny Depp but he sued her for implying he was a domestic abuser and is seeking $50 million in damages. The Texas-born Heard countersued, asking for $100 million and claiming she suffered ‘rampant physical violence and abuse’ at his hands.

They met in 2009 on the set of the film The Rum Diary and were married in February 2015. Their divorce was finalized two years later.

Heard’s attorneys have alleged that Johnny Depp would become a physically and sexually abusive ‘monster’ when he was drunk or on drugs, and pressed him extensively about his drug and alcohol use.