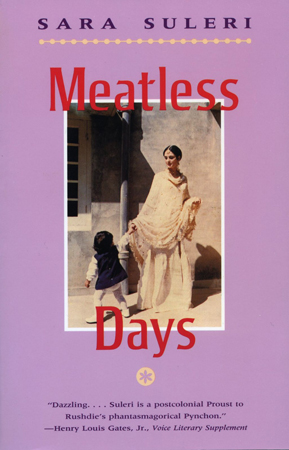 The metaphor of meat has multiple perspectives on Pakistani socio-political life. It can therefore be used for the multi-perspective nature of the life of Pakistanis inside and outside of the country. The meatless is the weak, powerless, lower-class, less educated and less provided people of Pakistan, while the meat-full is the reverse.

The same metaphor is found in the class divisions: if the kitchen is full of meat, it is that of a well-provided person and vice versa. Also, it talks about the fullness and emptiness of the history and possession and dispossession of land, identity and social status. When stretched further meatless may be the colonized, the ruled and the oppressed ones. All these interpretations find their respective space abundantly in the novel ‘Meatless Days’ by Sara Suleri. She is the author of ‘Boys will be Boys,’ ‘Excellent Things in women,’ ‘The rhetoric of English India,’ but the ‘Meatless Days’ earned her name and fame worldwide.

A narrative by a women writer quickly tends to be feministic and it is right about this novel too because it projects extraordinary things in women and the way the social pressure attempts to keep them hidden and how do women in Pakistan have been resisting these social pressures to claim their due share of socio-political life. Dadi emerges to be the most powerful and dominating character in the novel because the history and culture associated with Pakistan have been represented. She migrates to Pakistan, carries full baggage of her culture, and attempts to live up to it. The novel begins with her; she undergoes maximum physical and mental tortures and keeps on appearing and disappearing in the narrative. She involves her fully with the meat of the sacrificial goat at the time of the sacrificial Eid. She is the one who loses the love of her life and that of her son. She is representative of the suffering that women had to undergo during the migration from and towards Pakistan.

The second most significant woman character is Mair Jones, who marries Mr. Suleri and migrates to Pakistan. This is a clear case of antimigration and anti-colonial discourses because mostly brown people migrated to powerful European countries. Still, a white woman migrated to Pakistan to marry and live with a Pakistani. The family life is an analogy of colonization because a wife willingly assumed a subservient status the same way the colonized deemed a subservient position. At the same time, the dominating master controlled the situation. In this story, a white woman willingly accepts the same level, though with reservations. Mair Jones loves her Pakistani husband and gives birth to and rears her children. This proves to be a case of reversed colonization. She proves very useful to her husband and his family and the Pakistani people.

There are the siblings of Sara, namely, Iffat, Tillat, Irfan, and Shahid, whom the writer has also employed to discuss the socio-political life of the people of Pakistan. She discusses mainly that of the young men and women. She narrates how young women are not provided complete information and knowledge of the life around them to keep them unaware and vulnerable. This vulnerability proves harmful to many young women in Pakistan. Sara enfolds her siblings’ energy from childhood to adult adolescent life. She discusses how the children impact the life around them inside the house and outside the home and grow up with similar issues as they witnessed in their childhood.

The hallmark of the novel is that it portrays the private life of Pakistanis in terms of public life, and the public life of Pakistanis is intermixed with the personal life of Pakistanis. Here, the public becomes intimate, and the private becomes public. So, Pakistan’s history and its making become the history of every character in the novel. The personal history of every character can be discovered in the public record of Pakistan. For example. The life of Za Suleri is a prototype of this thesis in the sense that he is the one who has to migrate first for his job and education to Europe and returns to a newly established country with a white woman. Later on, he is arrested and threatened for writing against the then regime and again had to migrate to Europe to save his family and life. The history of Pakistan and the history of socio-political Pakistan is fully reflected in the life of Dadi as a woman and that of ZA Suleri as a man. Both migrate, suffer and disappear not because of their ill deeds but because of the political oppression around them.

The metaphor of meat has been appropriated to describe all such oppressed lives at the hands of the oppressors in a way to expose the reality of the public and private life of the Pakistani nation. The time has come now that we understand our problems and issues related to colonization and Postcoloniality and address them time to make the life of next-generation fruitful, valuable, and worth living by providing them a healthy and conducive environment instead of keeping hanging and lingering with the colonial past.