A stay in a mini Versailles Palace in the Loire Valley, with classic gardens, majestic interiors and boasting Mozart as a former guest 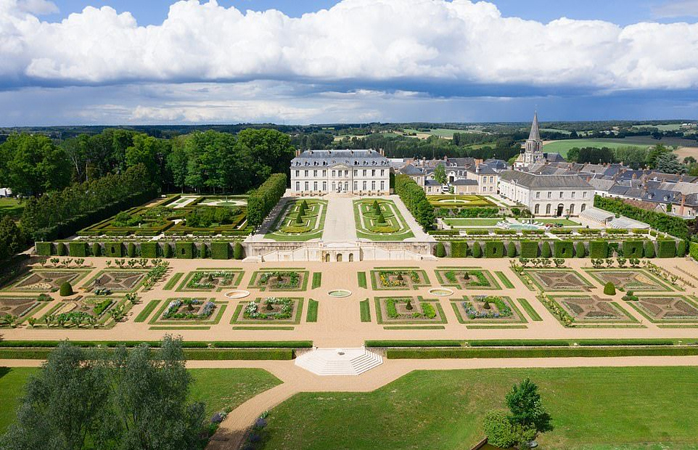 They say time travel is impossible – yet recently I seemingly achieved it, going back to 18th-century France and living like a nobleman for a couple of days in a gigantic chateau, a 258-year-old Loire Valley pile where all your dreams of lazy days spent in plush, regal splendour come true. Welcome to Hotel Chateau du Grand-Luce.

This breathtakingly grand neoclassic haven – a veritable mini Versailles Palace set in 80 acres – is named after the village it sits in just south of Le Mans, Le Grande-Luce.

And ‘sits in’ is no exaggeration – the curved outer medieval front wall extends forthrightly into the quintessentially French village.

The chateau was built in 1764 by Baron Jacques Pineau de Viennay III, a trusted confidant of King Louis XV, who wanted a modern palace to replace the fortified medieval castle on the family lands in Le Grand-Luce.

He commissioned architect and engineer Mathieu Bayeux, who designed the stunning Pont Wilson bridge in Tours, to rustle up something special.

It’s said that the baron sadly never got to see the finished building, that he died of a heart attack at the gate on his first visit. A huge shame, because Bayeux delivered in spades. Even in the chateau-laden Loire, it’s a standout property.

Upon the Baron’s death, Chateau du Grand-Luce passed to his daughter, Louise Pineau de Viennay. Mademoiselle Pineau de Viennay was an aristocratic supporter of the arts and hosted erudite philosophers and artists during the Age of Enlightenment, including Voltaire, Rousseau and Mozart, no less. Arriving at the historic chateau is a thrill, the car wheels crunching along the gravel driveway to the stone steps that lead up into the entrance hall.

Inside, attentive staff are on hand to distribute welcome glasses of Champagne. But before we grasp the stemware we reach down and scoop our jaws up off the floor at the sheer magnificence of our home for the next two nights.

The property, which became a hotel in 2019 and has 17 guestrooms, is run by San Diego-based Pilot Hotels, which renovated the property to a hotel spec so carefully and sensitively that it’s almost impossible at times to tell whether you’re in a hotel at all, or which century you’re in.

I half expect the Baron Jacques Pineau de Viennay to come waltzing through to join us for some bubbles.

There is no reception desk and no corporate hotel signage. It’s a world of dramatically high ceilings, grand fireplaces, crystal chandeliers, limestone and French white-oak floors and incredible artwork.

One ground-floor room, for instance – the ‘Salon Chinois’, which is part of the Baron’s Suite and open to the public when that’s not booked – has a wall covered in a huge mural depicting a fanciful life in Asia in the chinoiserie style by artist Jean-Baptiste Pillement. There is only one other place in the world you’ll find a painted wall by this artist – the Petit Trianon, Marie Antoinette’s private garden palace at Versailles. I’m told that the hotel is regularly approached by film crews desperate to use it as a location, but the answer is always no – ‘because the property is filled with furniture and artwork that in the event of being damaged, is irreplaceable’, reveals the property’s chatty and amiable director, Ludovic Poirier. Our bedroom, a corner suite with a village view, is a mini palace in its own right.

The entrance is formed of a ‘petit salon’ containing a beautiful blue sofa and writing desk; there’s a marble-clad ensuite with a rain shower, clawfoot bathtub and luxury taps, and shower units by Lefroy Brooks; and a vast main bedroom with two queen-sized beds, flamboyant jewel-toned archival wallpaper and two antique wardrobes. There’s no TV, but should you need a break from the antiquity vibe, there is a good Wi-Fi signal here, as elsewhere, for streaming on a personal device.

Our first evening meal at the hotel – I’m there with my partner and four-year-old daughter – is in surroundings so aristocratic it’s almost surreal.

We are seated in the chateau’s impossibly grand formal dining room, at one end of a very long wooden table adorned with burning candles in antique candelabras – at this point just assume everything is antique unless stated otherwise – and watched over by three convivial members of staff and stately paintings of Emperor Napoleon III and Empress Eugenie.

What makes matters even more unreal is that the food is far from ornate, it’s room-service fare – steak frites, burger and chips, and pasta.

The wine is next-level, though, with a red 2015 Pomerol Chateau Belle-Brise particularly delightful.

The next evening the food goes next-level, at the chateau’s fine-dining restaurant, Le Luce.

To accompany we have a 25-euro flight of three stupendous Loire Valley wines. My favourite is a rustic red made from the Gamay grape – a Terre de L’Elu, ‘L’Esquif’ 2018.

If you’re a wine fan, make tracking a bottle of this down an all-consuming life-goal.