Only animals can be ‘neutral’, not humans 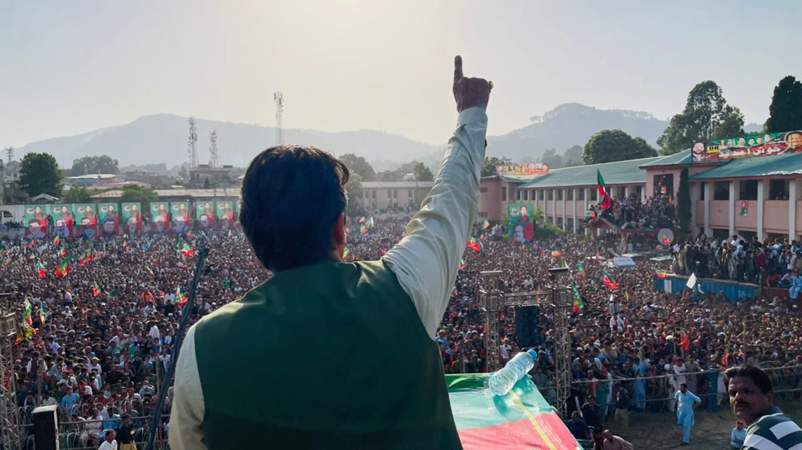 With the PTI’s planned long march to Islamabad approaching, former prime minister Imran Khan told the Shehbaz Sharif-led government Sunday that two million people will come to the federal capital irrespective of how many containers are put up to create hindrances. “Our opponents say if the temperature is high, then people will not come out. Put as many containers as you want, but 2 million people will come to Islamabad,” the PTI chairman said while addressing a public gathering in Abbottabad.

The former prime minister told his supporters that the incumbent government “fears” their passion and added that 11 parties had gathered to remove him from power. He claimed that when he and his supporters will come to Islamabad, the federal capital will fill up with the chants of “imported hukomat na manzoor” (imported government unacceptable) and “we want real freedom”.

Continuing his claim that the United States conspired to remove him from power, Imran Khan said that the incumbent leaders were involved in the process. “The Pakistani nation will not accept these leaders,” the PTI chairman claimed. The former prime minister went on to say that he was “never ready to be part of the war on terror with the US and neither was he willing to give air bases to Washington.” “Americans wanted a leader like Pervez Musharraf who would have obeyed them upon receiving a single call,” Khan claimed.

Imran Khan criticized the judiciary for opening its doors at midnight and said that people who faced corruption charges were propped up in the government.

He again said that only animals could be neutral as Allah had ordained humans to rise up against injustice.

Turning his guns towards PM Shehbaz Sharif, the PTI chairman claimed that he was a “beggar, servant, and a thief”. “The lies that Sharif family have told, I have not seen anyone spread such lies ever before,” claimed the PTI chairman.

He added that when the imported government came to power, the prices of all goods increased. Khan also requested the media to go to shops and ask about the prices of ghee like they used to do when he was in power.

Addressing his supporters, Imran said the government was afraid of PTI supporters’ “passion”. He added that PTI supporters would reach Islamabad against the “imported government”. “This nation will never accept the robbers who came to power through an American conspiracy,” he further alleged as he tried to cement his conspiracy theory.

Imran Khan said that his opponents claimed that the summer heat would not allow people to leave their homes to march on Islamabad, but he believed that heat cannot deter brave youth and sisters.

The former prime minister said that current rulers had taken power after collaborating with the United States but the Pakistani nation would never accept them. He said he never wanted to join the US war on terror and was holding negotiations with Russia for the import of fuel and wheat at cheaper rates.

He said the Americans did not want a prime minister in Pakistan. They wanted a head of the government like Musharraf, who surrendered on a single phone call and joined the US war on terror, he said. “They wanted a cherry-blossom who polishes shoes, who says that beggars are not chooser,” he said.

Imran Khan then used strong language against Prime Minister Shehbaz Sharif. “If you believe that for you we would be enslaved to the United States, don’t be misled,” he said.

He said that when he gave call for the march, the entire nation would arrive in Islamabad to give message that the “imported government not acceptable.”

Imran Khan said that since the new government had taken power the prices of food items had gone up and that TV journalists should go out to know what people say as they did when the PTI ruled the country.

He said that when billions of rupees are stolen from government coffers they are sent abroad and to send that money abroad you buy US dollars and when you buy dollars, the Pakistan rupee falls against the US dollar. Then the country faces inflation and heads towards destruction, he said.

Referring to Shehbaz Sharif’s statement that he was ready to sell his clothes to provide flour to people at cheaper rates, Imran Khan said, “Shehbaz Sharif stop these dramas. Don’t undress, we would be terrified to death.” He said that if the Sharifs returned half of the money they stole from Pakistan, the PTI would reduce wheat prices.

Imran Khan claimed that Maryam Nawaz had to delay her rally in Fatah Jang because people did not show up and then she held the rally in the dark of night.

Imran Khan said that lawmakers who were elected on reserved seats and “sold” their loyalties should be “thrown in jail”. One who has a constituency can argue that the PTI was unpopular in his area and therefore he had to abandon ship, he said while speaking to a gathering of Punjab lawmakers in Islamabad. “That is still understandable [but] how can someone go [to the other side] on a reserved seat? They have clearly sold their conscience. They should be ashamed […] they should be sent straight to jail.”

He went on to say that turncoats who had abandoned the party, after once making grandiose claims of being willing to render sacrifices, had forever humiliated themselves. “People will remind their children about what they have done.”

He went on to say that certain people had advised him buy loyalties of opposing lawmakers. “Our people told me that we can buy their people. We need Rs1 billion and we can buy eight to nine of their people. I got such an offer,” he said, adding that several people were “ready” to provide the money. “But I made a principled decision.”