* Shehbaz says Pakistan cannot be surrendered to one person's ego, arrogance and blatant lies
* Premature to talk about army chief's extension
* Maryam Nawaz went with heat of the moment 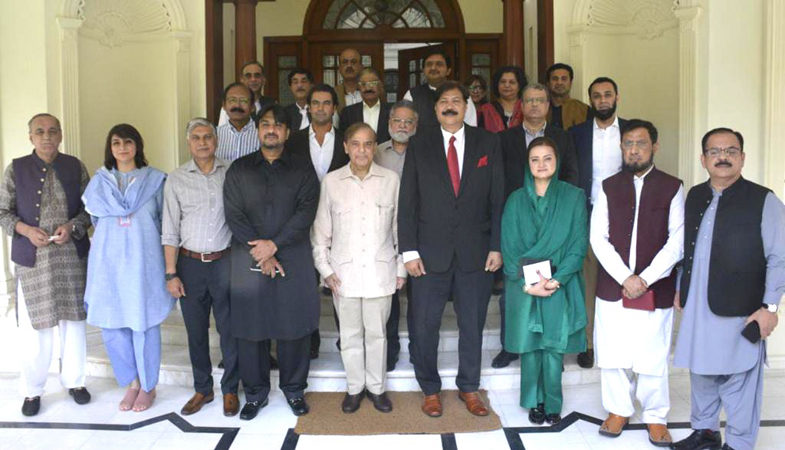 The prime minister said those concocting a narrative against national institutions were the real Mir Jaffar and Mir Sadiq. He said the state of Pakistan, constitution of Pakistan, and the respected institutions of Pakistan were challenged by Imran Khan in Abbottabad, adding that legal action would be taken.

Shehbaz said what Imran was doing could only be categorized as conspiracy not politics and this conspiracy was not against any political rivals but against the country. “Pakistan cannot be surrendered and compromised over one person’s ego, arrogance, and blatant lies. Imran first conspired to destroy economy of the country and was now planning to trigger civil war in Pakistan”, he said.

The PM pledged that these nefarious designs of Imran Khan would be crushed at all costs. “Imran Khan is this era’s Mir Jaffar and Mir Sadiq who wants Pakistan to face the same fate as Libya and Iraq,” he added.

“Imran incidentally also had a fake certificate of Sadiq, like Mir Sadiq,” he said. He went on to say that Imran was digging holes in the very boat he was riding and biting the hand that feeds him. The people of Pakistan, the constitution, and the institutions of Pakistan are not slaves of Imran Niazi, nor could he hold them hostage, he lambasted. He slammed Niazi’s speech and said Imran would not be allowed to become the Hitler of Pakistan. Imran had lied to the nation all this time, it’s about time he faces the truth, he added.

Shehbaz Sharif has said that the question related to the extension of the army chief is premature and he will see to it when the time comes.

The prime minister said that the government does not intend to restrict freedom of press and expression and added that under the Pakistan Electronic Crimes Act (PECA) ordinance and other laws, all possible protection will be given to journalists. He added that the Ministry of Law has already been entrusted with the task of reviewing the PECA ordinance. PM Shehbaz said that the government was taking steps to ensure power generation, transmission, and supply.

Shehbaz Sharif has said that his predecessor Imran Khan ruined the multibillion-dollar China-Pakistan Economic Corridor project and added that forensic audit of the CPEC projects carried out by the PTI-led government angered the Chinese authorities.

PM Shehbaz expressed his resolve to effectively work over the CPEC and Riko Diq projects. He also reaffirmed resolve to maintain ties with all the brotherly nations and other countries on basis of mutual respect and mutual interests.

Later, during an informal conversation with journalists in Model Town, the prime minister said that the word “revenge does not exist in Nawaz Sharif’s dictionary.” “There are no restrictions on the freedom of expression, but the spread of anarchy will not be allowed,” he said.

Speaking about the elections, the premier said that the time for the polls will be decided after consultations with the coalition parties. “This government will stay in power until August next year.”

The premier said that Pakistan was not in a position to sideline or antagonise the United States as it was the superpower. “[During his tenure] Nawaz Sharif had not said not said ‘absolutely yes’ to president Bill Clinton but he had handled diplomatic matters tactfully,” he said.

To a question on the extension of the army chief, Shehbaz said that he will see to it when the time comes, adding that every institution works within its constitutional ambit.

In response to a question about Imran Khan’s planned long march on Islamabad, the prime minister said what this laadla (spoiled brat) would get by marching on Islamabad. He did nothing in his nearly four years of government, Shehbaz said. Asked how the government planned to deal with the march, Shehbaz said that he would be able to answer the question after speaking with Rana Sanaullah. “So far Rana Sanaullah has not told me, so how do I tell you,” he said.