PM vows to transform KP into a developed province 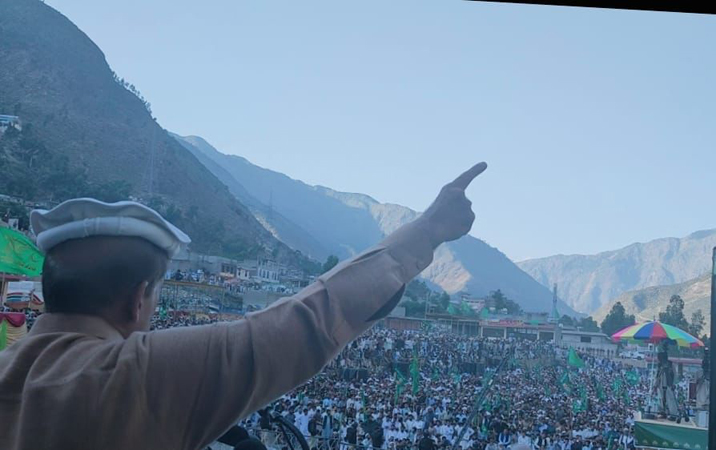 Prime Minister Shehbaz Sharif Saturday assured that the coalition government would work ceaselessly to transform Khyber Pakhtunkhwa into a developed province and provide all the basic facilities which had been taken out of the reach of the poor people by the incompetence and corruption of Pakistan Tehreek-i-Insaf government.

Addressing a public gathering at Bisham, the prime minister referring to the PTI’s provincial government, questioned how many hospitals and health facilities, it had constructed and provided free of cost treatment and medicines to the poor people during its rule.

Criticizing the previous PTI’s government, he said the price hike had reached to a historic peak in the last four years with huge debt hovering around Rs 24,000 billion. “Due to their corruption and incompetency, the previous rulers even did not put a single brick to the stalled projects, the BRT was delayed causing billion of rupees losses,” he said, adding the former rulers only unveiled plaques of the projects launched by the PML-N government. He said during the PML-N rule in Punjab province, the orphans, widows and hopeless were provided with free-of-cost treatment and now the same facilities had been restarted after gap of four years.

The medicines were being provided irrespective of the class differences, he added. The prime minister also assured similar provision of health facilities in KPK as well. He said that his government would leave no stone unturned to provide all the basic facilities of life to the people of the province, regretting that basic items like wheat and sugar had been taken out of the reach of the poor people by the former PTI government.

The prime minister said during the holy month of Ramzan, he had announced a reduction in the prices of flour and sugar in Punjab province. He further informed that the provincial government in Punjab would soon announce similar relief to the people and urged KP chief minister to follow the suit to provide relief to the masses.

The prime minister said if his request was not heeded to, he would come forward to serve the masses in KP with the provision of such relief. He stressed that uniform development of all provinces was must for the progress and development of the country.

He also appealed to chief minister KP to provide free-of-cost medicines and treatment to the poor families. The prime minister said, “Shehbaz Sharif is ready to embark upon such initiatives as the national resources belong to all provinces. I will sell my clothes to provide relief to the people of KP.”The prime minister lamented that country’s economy had been left in dire straits by the inept rulers of PTI. “It is not the same Pakistan for which its ancestors had given huge sacrifices, where health and education (facilities) are not equal for everyone. It is the right of every citizen to excel in every field of life by availing the equal opportunities,” he added.

The prime minister said Pakistan had been searching for its destination marred by incompetence and corruption during the last four years, the miseries of the public were further compounded by power load-shedding and unavailability of gas. Nawaz Sharif’s government had installed new power plants with the capacity of generating thousands of megawatts of power which were shut down by the PTI’s government, he added.

In a veiled reference to former prime minister Imran Khan, he said a person lied and misled the nation during the last four years. Now he was shy of mentioning any achievement of his government as he had fears to inform the public about the record price hike of flour and sugar and the load-shedding. They left the national coffer empty due to the ballooning of debts during their rule, he added. He said the coalition government was working day and night to transform Pakistan as envisioned by Quaid e Azam Muhammad Ali Jinnah.

The prime minister said that he would never lie before the people of KP, neither would make false promises and if he erred, he would seek for forgiveness. He assured that he would visit the province again when the implementation of his announcements starts taking place.

The prime minister asked the people to make a solemn pledge to strive with sweat and blood for the progress and prosperity of the country as going out with a begging bowl was not a solution to the economic woes of the country.

He also mentioned his recent meetings with the Saudi and UAE Crown Princes and appreciated their kind gesture towards the people of Pakistan. The prime minister also appreciated the people of KP that had always rendered unmatched sacrifices for the country by upholding the national flag high, adding the history of the province was replete with such sacrifices.

The prime minister also announced the construction of a medical college and grant of Rs2 billion for the streets and roads in the area. He also apprised that it was hardly a three weeks period, after he took charge of Khadim e Pakistan, that he had toured the whole country and decided to visit Shangla, to kickstart his KPK visits. The area was inhabited by ‘lions’ of Nawaz Sharif, he added.