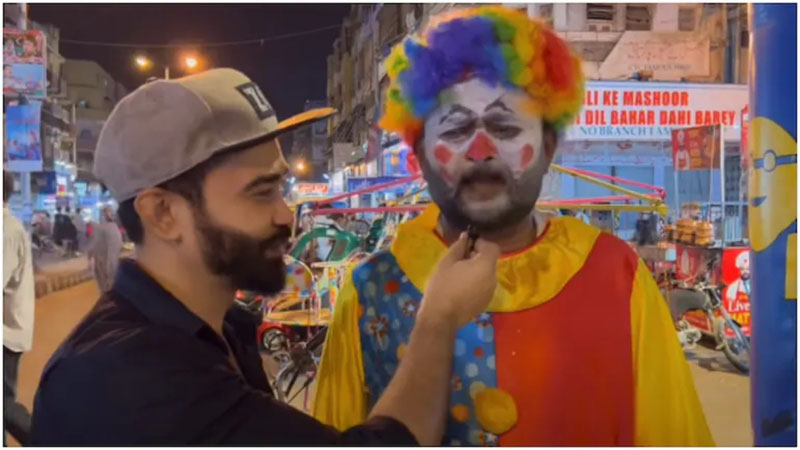 When it comes to acknowledging raw talent, the Internet never disappoints. And latest in this long list is a man dressed as a joker from Pakistan, who is not winning the virtual world by his tricks but melting hearts with his soulful voice.

When popular Pakistani Youtuber Ahmed Khan spotted the man on the streets of Karachi, he stopped to wonder what he was doing. As the man replied he was just trying to make children laugh and earning an honest living, Khan asked if he had some tricks up his sleeves. But what he was greeted with left everyone stunned online.

Replying that he likes to sing, the man started belting out some high notes, singing soulful renditions – the YouTuber couldn’t help but be in awe. While for Indian singers, he performed emotional numbers like ‘Abhi Mujh Mein Kahin’ by Sonu Nigam from Agneepath and Arijit Singh’s ‘Khamoshiyan’, asked if he could sing a song by a Pakistani singer, he opted for Zaroori Tha by Rahat Fateh Ali Khan.

Mesmerised by his soulful singing, the YouTuber couldn’t help but remark, why he hasn’t gone for any of the talent show yet. While the man explained that he has to earn a living to support his children, the YouTuber urged him to follow his dream.

Revealing his name has Arif Khan, the man also shared his phone number at the behest of the YouTuber, asking people to reach to him, saying he deserves more recognition.

Soon, the video went viral across social media sites, earning plaudits online, with many others rushing to the street where he works to give him some more spot light.

Many commented on the video saying it made their day and wished he gets a singing assignment soon.