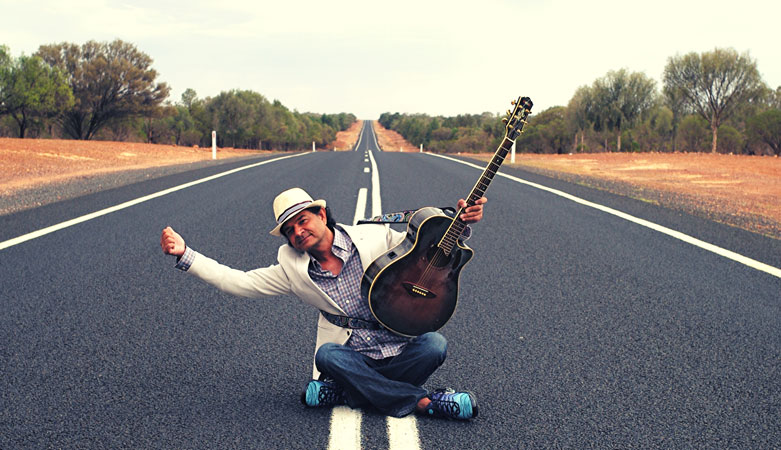 Pakistani-born Australian singer-songwriter, musician and filmmaker Mahmood Khan has been called one of the most noteworthy world music artists in recent times.

He is a musical journeyman whose life’s work and creative achievements are celebrated in Australia, back in his birth city and globally. And the essence of that celebration is dispersed across the tracks featured on his newly released six-track EP Rarity-an apt title reflecting the rare breed of artistic and entrepreneurial talent that has been part of the entertainment business for over forty years.

Mahmood Khan was born to Matloobur Rahman Khan and Durdana Matloob in Lahore, Pakistan. His parents migrated from India after the Indo-Pakistani war of 1947. Khan studied at the prestigious boarding school Sadiq Public School, Bahawalpur and completed his O’ levels there. He did his FSC at Government College, Lahore and then studied at the University of North Carolina in Charlotte. He learned to play the piano before he was ten years old and started writing his own songs before he turned twelve.

Mahmood would go on to write about his early formative years, in his memoir, Stayin Alive and an account of his struggles and adventures in the music business. An excerpt from the book reveals the origins of Khan’s music odyssey:

‘This is a true-life coming of age, “Fish Out of Water” story of a young, innocent Pakistani boy, Mahmood who fell utterly, totally, completely in love with American music, and the passion that burned in his heart and soul to get to America and make it happen for himself. It is this remarkable journey Mahmood took to actually get to the States – and learn everything he possibly could about all things music that drove him from his childhood beginnings in Islamabad to – having a number one song and performing at the Sydney Opera House for thousands of people.

His remarkable, unshakable quest nearly cost him everything – the dangers he encountered were beyond anything he could have ever imagined – from almost dying from a gang attack in North Carolina – to a carpet ban on his music across all TV and radio in Pakistan.

It started in the 70’s – watching an old black and white TV sitting cross-legged on the floor in Pakistan. He was watching a UNICEF Special, and like most kids – anything with music was a draw – a big draw. He jumped up and played a few simple riffs on the old stand-up piano – before he was shushed and told to sit down.

At that moment the Bee Gees began singing:

Those voices. That harmony. That Sound.

One day a box arrived from his favourite Aunt who had moved to Switzerland. As he tore it open there was a note that said:

“Mahmood! This is real music – Enjoy!”

No kid at Christmas/Eid was ever happier than this boy as he gingerly lifted out a turntable and boxes and boxes of MOTOWN hits Stevie Wonder, Temptations, Four Tops, Smoky Robinson, The Supremes, Marvin Gaye, James Brown – it was heaven.

American music was all he listened to – all he thought about.

Mahmood begged for a guitar for his next birthday, and because of his good grades – he got it. He began taking guitar lessons from a dry-witted, Scottish, hippy guy – who though very tough on his student – got a kick out of this skinny little kid’s enthusiasm and work ethic.

It was this intense, incredible work ethic that Mahmood possessed that would continue to surprise and impress people throughout his decades-long journey.

Mahmood knew he had to get to America. That’s where the music business lived. So – he wangled his father into letting him to go to college in North Carolina to study engineering.

Life for Mahmood took a fortuitous turn in 1987 when he moved to Los Angeles to seek fame and fortune in the then music industry capital of the world. He soon found work as a sound engineer at Jam Power Productions in Northridge, CA. The production company primarily focussed on R&B, jazz, and hip-hop genres, going on to score some of the biggest hits of the 1990s, including Coolio’s Gangster’s Paradise. Khan served at the studio for the next twelve years, citing his production assistant work as a crucial steppingstone and career highlight. Within a space of just a few years, Khan assumed the role of chief composer, producer, and engineer within the agency, rubbing shoulders with producers and artists such as Chucki Booker, Ced Malone, Cap L, Eazy E, Dr Dre, David Jones, Leon Sylvers and NWA among many others. At this time Khan began planning to embark on a solo career, redefining his song writing, production, and vocal skills.

During this time, he was working at the same studios Tom Petty, Kenny Rogers, Richard Marx, Quincy Jones, Keith Olsen, Ray Parker Jr, and George Tobin among many others regularly recorded. For almost two decades Khan was surrounded by some of greatest contemporary music makers in the world, whose knowledge and expertise obviously rubbed off on Khan, initiating a sustained period of creative growth and productivity.

By 1995, Khan was ready to release his debut album, Fairytale , an inventive and eclectic collection of songs that set Khan on a course of startling ingenuity and productivity. So much so that the work attracted the attention of internationally acclaimed Pakistani vocalist Nusrat Fateh Ali Khan. Nusrat Fateh Ali Khan was a renowned Pakistani vocalist, musician, composer and music director, primarily a singer of qawwali, a form of Sufi devotional music. He is considered by The New York Times to be the greatest Sufi singer in the Punjabi, Urdu and Hindi languages, and one of the greatest qawwali singers in history; he is often referred to as ‘Shahenshah-e-Qawwali’.’ He was described as the 4th greatest singer of all time by LA Weekly in 2016. He was known for his vocal abilities and could perform at a high level of intensity for several hours.

Mahmood would go on to write about his early formative years, in his memoir Stayin Alive and an account of his struggles and adventures in the music business. An excerpt from the book reveals the origins of Khan’s music odyssey

In 1997 while recording an album with Mahmood, Nusrat Fateh Ali Khan was quoted as saying, ‘I am impressed by this young man’s values, hard work, and dedication. He possesses a rare combination of skills from sound engineering to production, writing and his involvement with American Black music. This is why I am working with him today and it is the reason that one day he will be known for his work the world over’.

In 1997 the two collaborated on Only One, released by Solid Disc in the USA and which went on to sell over six million copies worldwide. Khan’s prolific tendencies spurred him to release works in quick succession, penning the track Alive which was later picked up by Dubai-based label Vanilla Music. Reports at the time stated that the single was considered by many in the industry to be ‘ahead of its time.’

He moved to Lahore, Pakistan, in 1998, releasing several songs in Pakistan and performing in several concerts. In 2002, Magnasound of India produced his album, Panah and in 2004 Nupur Music of India released his album, Ajnabi. In 2001, Khan released the most watched song on Pakistan Television history with the release of Tere Baghair with the video of Mohammed Ali Jinnah. Following the world-shattering events of 9/11, Khan released Enough Misfortune.

Prior to emigrating to Australia in the mid-2000s, Khan returned to Pakistan for several years. He also produced music for a Baray Ghulam Ali. He also continued to work on video production and digital editing skills. Khan was commissioned by the Pakistan Government to compose music for the 9th South Asian Games, held in 2004 in Islamabad, Pakistan. That year, MTV announced Khan Artist of the Month.

Khan’s life changed course yet again when he relocated to Sydney, Australia, in 2007. He achieved mainstream success with his break-out hit Like the River in 2009, when the song reached the coveted ARIA #1, with footage for the accompanying video recorded live at the Sydney Opera House. The Rudd Government awarded him honorary dual citizenship in 2009 for his contribution to the Australian music scene and the Pakistani-Australian community. That same year, he also released the album Made in Australia, which featured, amongst others, keyboard player Doug Emery, Grammy-winning drummer Lee Levin, legendary saxophonist Ed Calle, bass player Julio Hernandez and the late Dan Warner.

Khan’s creative flow was more vital than ever almost ten years later. In March 2020, he scored a series of international smashes when a suite of singles went viral. Consolidating this remarkable achievement, the track Runaway reached #1 on the iTunes Australia charts and #2 in the United States. In April, he followed this up with the track One Line Down, another iTunes Australia number 1. In May 2020, his Urdu album, Tere Baghair, topped the iTunes World Charts. But the successes kept mounting up. His May 2020 single Ginoo became yet another successful track, hitting #2 on the iTunes US charts. Sources in the industry say that this is the first that an Urdu/Hindi song has broken into the US charts. The song was produced by veteran producer and trumpet player Gary Grant. Some of the many artists Gary has recorded with include, Barbara Streisand, Michael Jackson, Whitney Houston, Celine Dion, Toni Braxton, Brian McKnight, Frank Sinatra, Natalie Cole, Earth Wind & Fire, Go West, Take Six, Elton John and Aerosmith. Gary has also recorded with one of the most respected producers of our time, Quincy Jones on the albums, Back On the Block, and Q’s Juke Joint. Other producers Gary has worked with included David Foster, Glenn Ballard, Dave Grusin, and Baby Face. Gary was also a guest artist with the ‘Chicago 17 horns.

Mahmood capped off 2020 with yet another track, Merry Go Round, soaring to the top spot on the iTunes Australia Charts. Alongside these hits, his classical album with the Willoughby Symphony Orchestra topped the iTunes Charts in eighteen countries. In August 2020, it reached the top of Billboard US Classical Charts, one of the many outstanding achievements of an illustrious career.