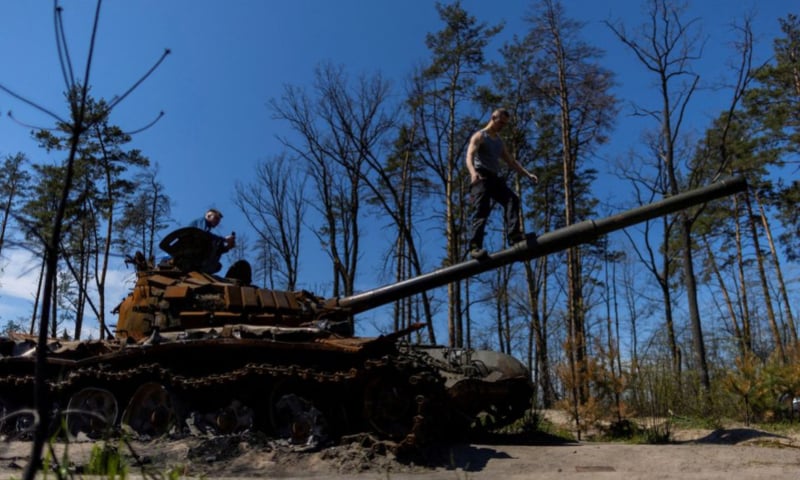 The conflict in Ukraine is taking a heavy toll on some of Russia’s most capable units and most advanced capabilities, the British Ministry of Defence tweeted in a regular bulletin on Saturday.

At least one T-90M, Russia’s most advanced tank, has been destroyed in the fighting, the ministry said.

Approximately 100 T-90M tanks are in service amongst Russia’s best equipped units, including those fighting in Ukraine, it revealed.

Find out more about the UK government’s response: https://t.co/cAYdsWHMvV

The report said that it will take considerable time and expense for Russia to reconstitute its armed forces following this conflict. “It will be particularly challenging to replace modernised and advanced equipment due to sanctions restricting Russia’s access to critical microelectronic components.”

It will, the report added, be particularly challenging to replace modernised and advanced equipment due to sanctions restricting Russia’s access to critical microelectronic components.

Meanwhile, local authorities in the Ukrainian city of Mariupol have accused Russian forces of opening fire on a car on its way to evacuate civilians from a vast steel works, killing a fighter and violating a ceasefire agreement.

Russia did not immediately comment on the Mariupol city council’s statement. Moscow has denied targeting civilians and had offered a ceasefire to allow the evacuation of civilians trapped in the Azovstal steel plant with Ukrainian fighters.

“During the ceasefire on the territory of the Azovstal plant a car was hit by Russians using an anti-tank guided weapon. This car was moving towards civilians in order to evacuate them from the plant,” Mariupol city council said in an online post.

“As a result of the shelling, 1 fighter was killed and 6 were wounded. The enemy continues to violate all agreements and fails to adhere to security guarantees for the evacuation of civilians.” Reuters could not verify the city council’s statement.

Russian forces have occupied Mariupol, leaving the city’s last defenders and scores of civilians holed up in the Azovstal plant.

The United Nations and the International Committee of the Red Cross (ICRC) have helped evacuate some of the civilians and Ukraine said a new attempt was under way to evacuate the civilians on Friday.