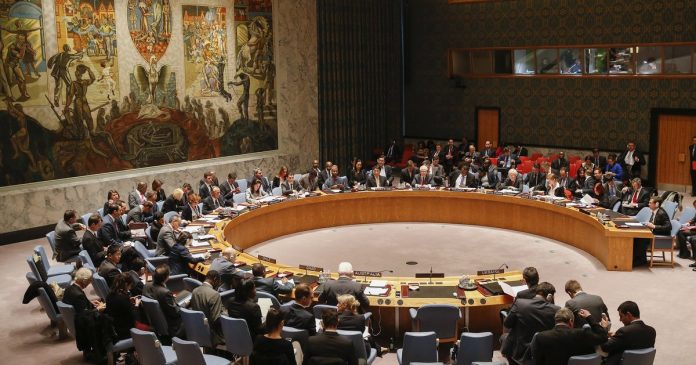 UNITED NATIONS: The United Nations Security Council has adopted its first unanimous statement expressing “deep concern” over the raging Ukrainian conflict and backed efforts by the U.N. chief to find a peaceful solution.

Security Council statements must be approved by all 15 of its members, and the one adopted on Friday appeared to have averted Russia’s veto by referring to the conflict as “disputes” rather than “war” — as Moscow insists that it’s Feb. 24 military offensive against Ukraine constitutes only a “special military operation.”

The brief statement, drafted by Norway and Mexico, was adopted by consensus, with support from Russia along with the other members.

The United States, this month’s holder of the rotating presidency, said in the statement that the Security Council “expresses deep concern regarding the maintenance of peace and security of Ukraine.”

“The Security Council recalls that all member states have undertaken, under the Charter of the United Nations, the obligation to settle their international disputes by peaceful means,” it added.

“The Security Council expresses strong support for the efforts of the Secretary-General in the search for a peaceful solution,” reads the statement, which also requests U.N. chief Antonio Guterres brief the council again “in due course.”

Guterres welcomed the Council’s support on Friday, saying he would “spare no effort to save lives, reduce suffering and find the path of peace.”

“As I have often said, the world must come together to silence the guns and uphold the values of the UN Charter,” the UN chief said.

“For the first time, the Security Council spoke with one voice for peace in Ukraine”.

His visits paved the way for joint United Nations and International Committee of the Red Cross operations that have evacuated some 500 civilians from Ukraine’s port city of Mariupol and the besieged Azovstal steel plant in the past week.

The Security Council statement was agreed despite a diplomatic tit-for-tat that has been escalating since Russia launched its military offensive and what Guterres blasted as Russia’s “absurd war.”

Russia vetoed a draft Security Council resolution on Feb. 25 that would have deplored Moscow’s invasion. China, the United Arab Emirates and India abstained from the vote. A council resolution needs nine votes in favour and no vetoes by the United States, Russia, China, France or Britain to pass.

The 193-member U.N. General Assembly, where no country has a veto, has since overwhelmingly adopted two resolutions, reflecting Russia’s international isolation over Ukraine. Such resolutions are nonbinding, but they carry political weight.

The General Assembly has deplored Russia’s “aggression against Ukraine,” demanding both that Russian troops stop fighting and withdraw and that there be aid access and civilian protection. It also criticized Russia for creating a “dire” humanitarian situation. read more