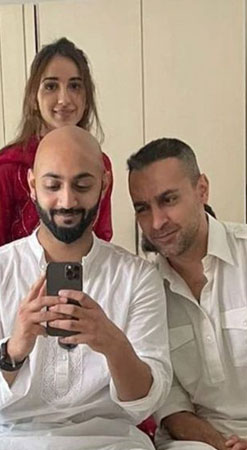 There wasn’t a soul who didn’t fall in love with Jaane Tu…Ya Jaane Na actor Imran Khan. The sweet, innocent, goodboy Jai won hearts and Imran become a national heartthrob. He went on to star in films like I Hate Luv Storys, Delhi Belly, Mere Brother Ki Dulhar, and Ek Main Aur Ekk Tu among other films that established his position as a hero.

But after the failure of Gori Tere Pyaar Mein and Katti Batti, the actor abruptly quit showbiz. A few years later, the actor announced his separation from his wife Avantika Malik. He quit social media and fans barely get to see him. Although fans re-watch some of his best films online, they hope that things change and they get to see the actor once again.

Aamir Khan’s daughter Ira went on to share inside images from the Eid celebrations and Imran looks unrecognisable. Along with the images, Ira captioned the post as, “Did you know you’re eligible for eidi till you’re married?! I thought once you’re an adult it’s done.

But after the failure of ‘Gori Tere Pyaar Mein’ and ‘Katti Batti,’ the actor abruptly quit showbiz

You learn something new everyday.

After dating for a couple of years, the two tied the knot in 2011 in Aamir Khan’s Pali Hill home. The two welcomed their first child in 2014 and named her Imara. In 2019, the duo announced that they have separated and Avantika left Khan’s home with their daughter. A couple of months back, Imran was spotted at the beach with his daughter and fans couldn’t believe it was the same guy who charmed them on the big screen.

Imran may be comfortably settled in a life away from showbiz, but we hope Khan makes an appearance soon, at least for his fans.