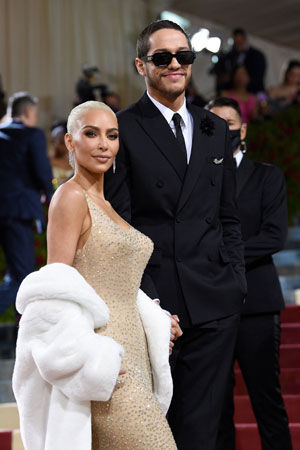 Kete is ready to rule the red carpet! Kim Kardashian and Pete Davidson made their second red-carpet appearance together at the 2022 Met Gala, proving they’re in the running for best dressed couple of the night. The pair, who have been going strong since November 2021, stepped out together on May 2 in New York.

Dressing for the theme, “In America: An Anthology of Fashion,” Kim and Pete embraced gilded glamour and donned elegant looks for the charity event. Kim wore Marilyn Monroe’s famous gown, along with a white fuzzy shawl, before changing into a replica inside the event. Pete, wearing a Dior suit and sunglasses, was by her side to give her a hand up as she made her way up the stairs and into the museum.

The SKIMS mogul teased her look during an April interview with Access Hollywood, saying, “I think it will be up to the last minute because it can’t be tailored, so I have to fit into it like exactly.” Looks like she pulled it off!

Both attended the 2021 Met Gala back in September, when she Kim went incognito with an all-black Balenciaga look, and Pete wore a black-and-white dress by designer Thom Browne. And it turns out they did connect at last year’s gala before things turned romantic between them. She tried to get his advice ahead of her Saturday Night Live hosting debut, which took place in October.

Dressing for the theme, ‘In America: An Anthology of Fashion,’ Kim and Pete embraced gilded glamour and donned elegant looks for the charity event

“He had been asking around for my number a little bit,” Kim said on the Not Skinny but Not Fat podcast in April. “I saw him at the Met and he knew I was hosting SNL but it wasn’t announced yet. He came up to me and we were talking about SNL.” She told Pete she was “nervous” for the gig, and Pete then offered her his phone number in case she wanted any tips. “I had gloves on and I couldn’t get into my phone,” Kim shared, adding that he left without giving out his digits. “We never connected or anything until.” As fate would have it, they seemed to hit it off while shooting the show and sharing a kiss on-screen. The duo went public with their romance just a few weeks later and have since been photographed enjoying trips to the Bahamas, Staten Island, Beverly Hills and, in recent days, Washington D.C., Orlando and now the Big Apple. Clearly, they get around.

Last month, Pete even attended the premiere of Hulu’s The Kardashians to support his girlfriend but refrained from walking the red carpet with her. They arrived together and he looked on from the sidelines while Kim posed solo.

They finally made their red carpet debut on April 30 at the White House Correspondents’ Dinner.

It’s only fitting that their next big photo op came at the Met Gala, making a full-circle moment for the new It Couple.