LAS VEGAS: Undisputed super middleweight king Saul “Canelo” Alvarez embarks on another ambitious target on Saturday when he jumps up in weight class to take on Russian light-heavyweight world champion Dmitry Bivol in Las Vegas. The 31-year-old Mexican icon, seen by many as the best pound-for-pound fighter on the planet, faces the undefeated Bivol (19-0, 11 knockouts) at the T-Mobile Arena in what could be the first step in another unification quest. Alvarez (57-1-2, 39 knockouts) has already made boxing history by becoming the first man to unite all of the super middleweight belts on offer, stopping Caleb Plant last November to add the IBF title to his WBA, WBC and WBO crowns. Now Alvarez has his sights set on moving up from 168 pounds to conquer the 175-pound light heavyweight division — starting with Bivol’s WBA title on Saturday. “I like the idea to be undisputed in two weight classes,” Alvarez said during a recent conference call. “I feel in my prime. I feel strong. I feel confident that I can beat anybody.” Alvarez — who offers a formidable combination of speed, skill, power and a high boxing IQ — already has experience of success at light-heavyweight, knocking out then WBO champion Sergey Kovalev in 11 rounds during a bruising 2019 title fight. The Mexican will typically spend the early rounds of a fight biding his time, working out his opponent before zeroing in on weaknesses with ruthless efficiency. That tried-and-trusted approach is likely to be on show on Saturday against Bivol, who Alvarez described as a “very difficult fighter.” “He can use distance in and out, but I have the experience and the skills to get inside,” Alvarez said. “I need to find a way to get inside and I will. I need to be patient.” Victory on Saturday would potentially leave Alvarez just one fight away from a chance to unite all of the light heavyweight titles. Artur Beterbiev, the Russian holder of the WBC and IBF titles, is due to face the USA’s Joe Smith Jr, the WBO champion, in a unification fight in June, and Alvarez is keen on meeting the winner of that contest. 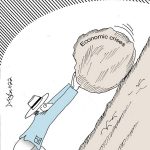