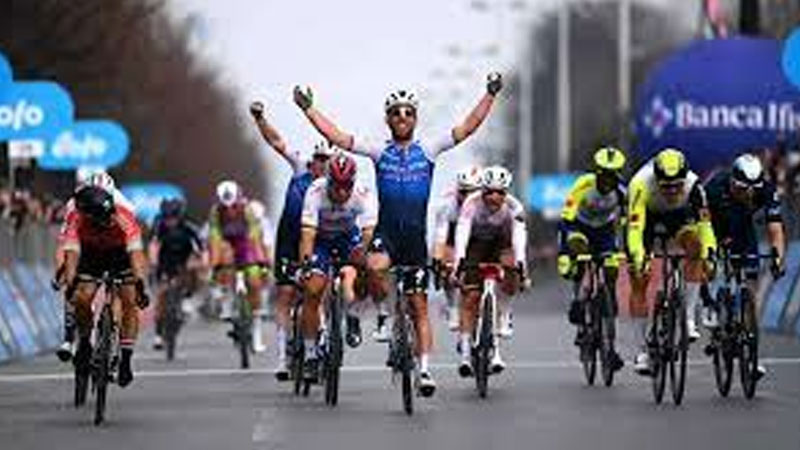 BUDAPEST: The Giro d’Italia peloton will race out of Heroes’ Square in Budapest on Friday before switching to Sicily next week for a mountainous 21-stage adventure that culminates in a time-trial showdown in Verona on May 29. Starting with three days of scenic rides in Hungary with a hilltop citadel finish on day one, the battle for the leader’s pink jersey will rage across 3,446km of Italy’s peaks and plains with often decisive changeable weather conditions to contend with. Swashbuckling Dutch rider Mathieu van der Poel makes his Giro debut and is tipped to upset the sprint pack, led by British ace Mark Cavendish, to don the jersey first after stage one. Hungary had been scheduled to host the start of the Giro in 2020 but that year’s race was postponed until October due to the pandemic and held entirely within Italy.

The first skirmish in the title battle begins in earnest on the volcanic slopes of Mount Etna on stage four on Italian star Vincenzo Nibali’s home island of Sicily. For the 37-year-old two-time Giro winner and six-time podium finisher Nibali, the race may be a farewell fling. British team Ineos have won the past two editions and their leader Richard Carapaz is favourite in a wide field of pretenders, with the winner likely to emerge in the relentlessly mountainous final week. Carapaz won the Giro in 2019 for Movistar, and with his teammate Egan Bernal out after a horrific crash, is Ineos’s star man after his third place at the Tour de France last year and Olympic gold in Tokyo. Carapaz has the experience, back-up and mentality but will be pursued by a wide open field from among the 22 teams with eight riders each.

Youthful Almeida among chief contenders: There are arguments in favour of Joao Almeida of UAE Emirates, Simon Yates of Bike Exchange, Mikel Landa of Bahrain Victorious and the French nearly man Romain Bardet. The 23-year-old Almeida led the race for 15 days on his breakout 2020 appearance with Quick-Step, and returns as Team UAE leader in the absence of Tadej Pogacar. “Carapaz is the number one favourite, we’ll be keeping an eye on everyone, but especially him,” Almeida said in Budapest. Almeida may have grown since 2020, but with only 26km of time-trialling he and any other rider banking on making a difference in the individual race against the clock will know that advantage to be limited.

With six summit finishes on the itinerary, support for recent Tour of the Alps winner Bardet appears justified. “I’ll be ready for the third week,” Bardet said. “The will to win and whatever you have left in the tank at that stage will make the difference.” The other Gulf team, Bahrain Victorious, must also be taken seriously when they say their goal is to win the Giro with climber Mikel Landa. There are also up to six sprint finishes possible, with Cavendish riding for Quick-Step after a nine-year Giro lay-off, seeking to add to his 15 stage wins there. He must beat Australia’s pocket rocket Caleb Ewan, UAE’s Fernando Gaviria and FDJ fast man Arnaud Demare. This will be the 105th edition of the Giro, the first of cycling’s three major three-week tours, with the Tour de France in July and the Vuelta a Espana in August.