* Anisur Rahman has perhaps traveled across time when he selected, edited and translated Urdu ghazals and presented
them in an anthology titled, ‘Hazaron Khawaishen Aisi:
The Wonderful World of Urdu Ghazals’ 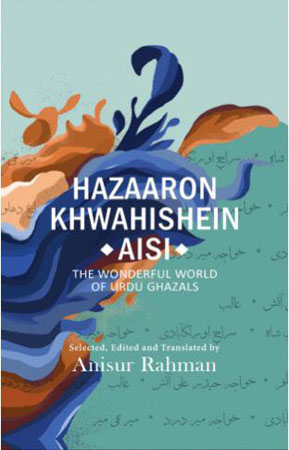 It requires creative prowess to write poetry that strikes a melodious cord of emotions with the readers’ minds and souls.

However, it is the brilliance of the translator to read the poetry, in Urdu and interpret it in the English language – word by word – while keeping the emotions and the essence of the stanzas intact. Anisur Rahman has perhaps traveled across time when he selected, edited and translated Urdu ghazals and presented them in an anthology titled, “Hazaron Khawaishen Aisi: The Wonderful World of Urdu Ghazals”. These ghazals are penned by the greats of this domain. Mr. Rahman strolled through the words of these legends who have stored worlds of sentiment, passion, reflection, and thoughts in their ghazals – the echoes of which still resonate among those who connect with these words. Rahman walked through the metaphysical times of Mohammad Quli Qutub Shah, Vali Deccani where ghazal presented a thought about pure human emotions. Mr. Rahman may have experienced the time of enlightenment and its various forms and manifestations by reading the ghazals of Mirza Mohammad Rafi Sauda, Khwaja Mir Dard, and Mir Taqi Mir. Through the ghazals of Bahadur Shah Zafar and Asadullah Khan Ghalib, he would have explored the arrays of the romance of realism, a genre where Ghalib reigned supreme with his metaphors.

The modern thoughts and perspectives embedded in the ghazals of Khwaja Altaf Hussain Hali, Jigar Moradabadi, and Firaq Gorakhpuri would have taken Mr. Rahman to the age of transition where the thoughts of human bindings were replaced by the old myths of love.

The era of progressive poets would have given Mr. Rahman the vision to look ahead through the eyes of Asrarul Haq Majaz, Faiz Ahmed Faiz, and Majrooh Sultanpuri. Furthermore, the ghazals by Ibn-e Insha, Jaun Eliya, Ahmad Faraz, Zehra Nigah among others provide readers to perceive the society with a new lens that was not shrouded by the past but allowed all poets to stand by their perspectives, views, and opinions that explored the individual and the society at large.

This book, an anthology, includes ghazals from 65 poets. He has included a brief profile of each poet before their ghazals that adds value to the book, enlarging its depth and appeal.

The era of progressive poets would have given Rahman the vision to look ahead through the eyes of Asrarul Haq Majaz, Faiz Ahmed
Faiz and Majrooh Sultanpuri

Tabish Khair, in the foreword, writes “the ghazal has been used in Urdu not just to pen love verse but also many kinds of religious, metaphysical, philosophical, realist and political poetry.” Mr. Khair further explores ghazals and their forms. In the preface, Mr. Rahman traces the history of ghazal beginning from the sixth century, its evolution, while discussing the contexts of ghazal including the context of language, cultural historiography, socio-political histories, comparative studies, and critical reception. Mr. Rahman’s preface is akin to a comprehensive essay that the students of Urdu language and ghazal will benefit from. The book may be an anthology but it can serve as a reference book and a case study for research students treading in the field of Urdu poetry.

The hard work of Mr. Rahman, currently serving as senior advisor at Rekhta Foundation, is reflected in how intricately he translates all words and stanzas – a highly appreciable feat indeed. It also speaks volumes about his intellectual sense, comprehension of words and their contextual meaning, and his ability to preserve the sanctity of the poet’s emotional sense when translated into English.