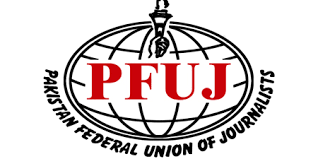 QUETTA: On the eve of the World Press Freedom day Pakistan Federal Union of Journalists (PFUJ) has expressed its strong resolve for ensuring freedom of press and expression in the country which remained on sharp decline during the previous  regime.

In a joint statement issued on Monday the President PFUJ Shahzada Zulfiqar and Secretary General Nasir Zaidi underlined the importance of freedom of press, free speech and expression.  “Freedom of press is hallmark of any developed and healthy society and it cannot be compromised”

PFUJ leaders said that the Imran led government introduced draconian laws in the shape of Pakistan Media Development Authority (PMDA) and amendment to the Prevention of Electronic Crime Act (PECA) which could have imposed “Martial Law on Media”. Such laws were designed to deny freedom of press and expression and gag the media, they observed.

But it was a sustained campaign of the PFUJ and civil society that forced the government to take back the amendment, they added.

Expressing concerns over the state of media freedom in Pakistan, the two leaders said, “In at least nine cases, journalists were intimidated or silenced altogether, whether in the form of assault, enforced disappearances, murder or overt censorship. Pakistan remained on sharp decline on the world press freedom index as the PTI led government used authoritarian tactics against media, journalists and media workers.”

They termed the tenure of the PTI government terrible for media persons. “The previous government registered concocted and fabricated cases against journalists besides resorting to abduction and attempts to kill media professionals.

It also imposed censorship and issued media advice. Those who did not succumb to the government’s pressure were punished financially that harmed media houses and media persons equally pushing the industry towards a financial bankruptcy.

In addition to that, media persons were harassed by PTI activists and even women journalists and anchors were harassed and trolled by cabinet members which cannot be seen in  any civilised society, the statement said.

The government should immediately create an environment for freedom of press  initiating a dialogue with stakeholders to devise a strategy that could protect freedom of press in the country, the PFUJ statement concluded.