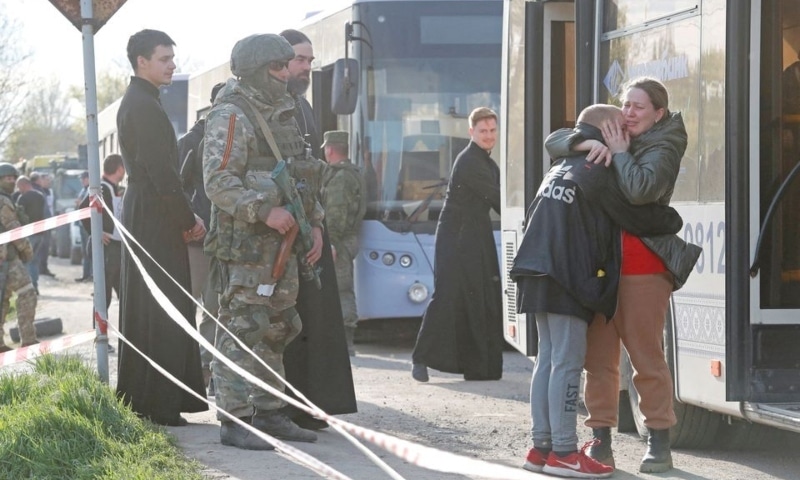 Humanitarian organisations worked to evacuate more civilians from the devastated Ukrainian port city of Mariupol on Monday but hundreds of people remained trapped in the Azovstal steelworks, the last stronghold of resistance to the Russian siege. The first group of evacuees was due to arrive in a Ukrainian-held town northwest of Mariupol on Monday. But Russian forces resumed shelling the steelworks on Sunday as soon as the buses had left the plant, a city official said.

People still stuck there were running out of water, food and medicine as Russian forces hemmed them into the industrial complex, whose network of bunkers and tunnels has provided shelter from weeks of Russian bombardment.

Intense Russian bombardments were also hitting towns in eastern Ukraine on Monday, causing severe damage, a regional governor said. On the international front, EU energy ministers were due to hold emergency talks on Moscow’s demand that European buyers pay for Russian gas in roubles or face their supply being cut off. While the EU has imposed heavy economic sanctions on Russia in response to its invasion of Ukraine, the issue of Russian energy supplies has posed a dilemma that threatens to crack the united front.

The Russian military is now focusing on crushing resistance in Ukraine’s south and east after failing to capture Kyiv in the early weeks of the war, now in its third month. Its assaults have flattened cities, killed thousands of civilians and forced more than five million to flee the country. Mariupol, on the Sea of Azov, has become emblematic of the brutality of the war and the suffering of ordinary people. Russian President Vladimir Putin’s forces are now in control of nearly all the city, linking up Russian-held territory to the west and east.

Around 100 civilians evacuated from the Azovstal steelworks were due to arrive in the Ukrainian-held city of Zaporizhzhia, 230 kilometres northwest of Mariupol, on Monday.

“For the first time, we had two days of a ceasefire on this territory, and we managed to take out more than 100 civilians — women, children,” President Volodymyr Zelenskiy said in a nightly video address.

Footage from inside the steelworks showed members of the Azov regiment helping civilians through rubble and onto a bus. But hundreds remain trapped inside. One older evacuee accompanied by young children said survivors were running out of food. “Children always wanted to eat. You know, adults can wait,” she said. Last week, Russia said it had decided against storming the steelworks and would instead blockade it. But sporadic bombardments have continued.

“Yesterday, as soon as the buses left Azovstal with the evacuees, new shelling began immediately,” Petro Andryushchenko, an aide to the Mariupol mayor, told Ukrainian television.

The International Committee of the Red Cross said it was taking part in the evacuation operation along with the United Nations and Ukrainian and Russian officials. More than 50 civilians arrived at a temporary accommodation centre in Russian-controlled territory on Sunday after escaping from Mariupol, a Reuters photographer said. Moscow calls its invasion a “special military operation” to disarm Ukraine and rid it of anti-Russian nationalism fomented by the West. Ukraine and the West say Russia launched an unprovoked war of aggression that threatens to spiral into a much wider conflict. Russian Foreign Minister Sergei Lavrov said on Sunday that Moscow only wanted to guarantee the security of pro-Russian Ukrainians in the east and was not demanding that Zelenskiy surrender as a condition for peace.

“Our aim does not include regime change in Ukraine,” Lavrov said in an interview published on his ministry’s website.

Ukraine’s military said on Monday that Russian forces were trying to take over the eastern town of Rubizhne and prepare an assault on Sievierodonetsk. Luhansk region Governor Serhiy Gaidai said three people had been killed by shelling over the past 24 hours. The heaviest clashes were taking place around Popasna, to the west of the Russian-held regional capital. The shelling was so intense they could not even collect the bodies, he said.

​”I don’t even want to speak about what’s happening with the people living in Popasna, Rubizhne and Novotoshkivske right now. These cities simply don’t exist anymore. They have completely destroyed them.”

Moscow is pushing for complete control of the Donbas region, where Russian-backed separatists already controlled parts of Luhansk and Donetsk provinces before the invasion. In Russia, two explosions took place on Monday in Belgorod, a southern region bordering Ukraine, governor Vyacheslav Gladkov said. The cause of the blasts was not clear but the Kremlin has accused Ukraine of making cross-border attacks. Gladkov said there were no casualties. In Brussels, EU energy ministers were due to meet in a bid to find a way out of the dilemma posed by Russian energy supplies, which count for 40 per cent of EU gas and 26pc of its oil imports.

Germany and others have so far resisted calls for an abrupt halt to Russian fuel imports for fear of economic damage, while Moscow is demanding that European buyers pay for Russian gas in roubles or face their supply being cut off. Russia halted gas supplies to Bulgaria and Poland last week after they refused to meet its demand to effectively pay in roubles.

Diplomats said the EU is edging towards a ban on imports of Russian oil by the end of the year. But German Economy Minister Robert Habeck said on Monday some countries were not yet ready for an embargo on Russian oil. Germany did not want to trigger an economic catastrophe, he said. Meanwhile, the Russian foreign minister said the country is not looking to end its war in Ukraine by Victory Day on May 9, as the country looks set to mark the key anniversary under the cloud of a deadly conflict.

Speaking with Italian outlet Mediaset, Sergei Lavrov insisted Moscow would not rush to wrap up its so-called “special military operation” in time for the anniversary, which celebrates Nazi Germany’s surrender to allied forces — including the then Soviet Union — in 1945.

“Our military will not artificially adjust their actions to any date, including Victory Day,” Lavrov said in the interview released on Sunday.

“The pace of the operation in Ukraine depends, first of all, on the need to minimise any risks for the civilian population and Russian military personnel,” he added.

Russia typically marks Victory Day in grand style, with a large military parade in central Moscow and a speech by President Vladimir Putin hailing the country’s leading role in the defeat of fascism in Europe. But this year’s celebrations will come against the backdrop of Moscow’s bloody military campaign in Ukraine, which Putin has justified with claims the ex-Soviet country requires “denazification” and other allusions to World War II.