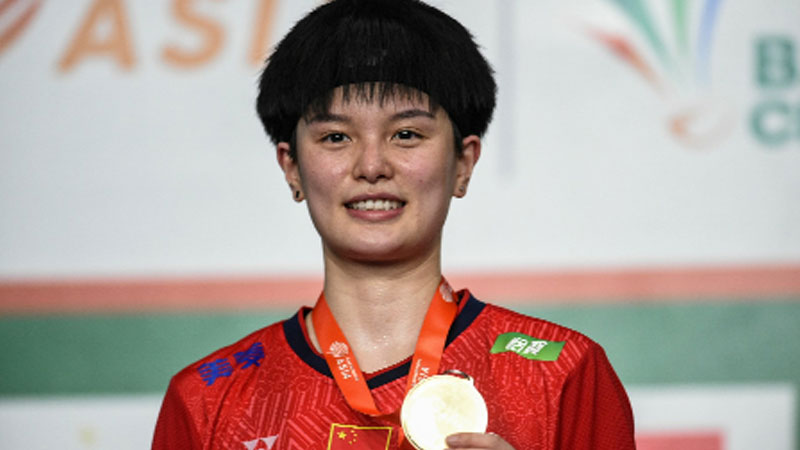 MANILA: Unseeded Wang Zhiyi withstood a late fightback from world champion Akane Yamaguchi to record a stunning victory in the women’s final of the Badminton Asia Championships on Sunday. Malaysia’s Lee Zii Jia took the men’s title with a 21-17, 23-21 win over Indonesia’s Jonatan Christie — then tore off his sweaty top and hurled it into the Manila crowd in celebration. China’s Wang, ranked 16th in the world, needed treatment on a back injury but hung on to beat the Japanese top seed and defending champion Yamaguchi 15-21, 21-13, 21-19 in 78 minutes of pulsating action that had the raucous crowd rocking. As in her semi-final win Saturday over second seed An Se-young of South Korea, Wang had to recover from the loss of the opening game.

After levelling the match, the up-and-coming Chinese player looked to be heading for a comfortable victory as she raced into a 16-5 lead in the decider, before nerves and her niggling back kicked in to give Yamaguchi a lifeline. The Japanese player used all her experience to claw her way back as Wang began to make unforced errors and Yamaguchi levelled at 19-19 after a lung-bursting 30-shot rally.

But Wang, who moments earlier had needed attention from the trainer at the side of the court, summoned up reserves of energy and forced Yamaguchi to go long to set up a first championship point. Another marathon rally followed, but when Yamaguchi netted, Wang collapsed on her back in exhaustion and elation as she became Asian champion for the first time.

The men’s final was a more straightforward affair with third-seeded Lee mostly in control throughout against Christie, the fourth seed. Christie fought back in the second game but failed to nail two game points, the 24-year-old Lee sealing the title on his first championship point when his opponent fired wide on a forehand. The Indonesian challenged the out call but a video review confirmed it and Lee collapsed on his back, before tearing off his top and hurling it into the crowd, followed by his racquet. On a good day for badminton superpower China, they also won the mixed doubles and women’s doubles crowns.