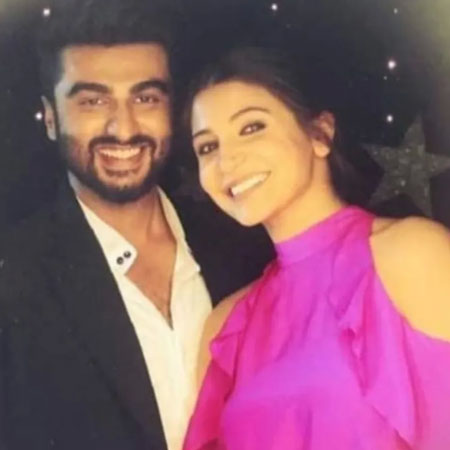 Bollywood star Anushka Sharma turns a year older today. And while friends and colleagues took to social media to share heartwarming wishes for her, it was good friend Arjun Kapoor’s hilarious post that’s winning over the internet. Taking a picture of Anushka lying on the grass, he added a photo of himself in a similar pose. Arjun wrote along with the picture, “Mera Nature yeh hai ki main India’s very own Nature Girl Anushka Sharma ko ek Natural sa wish karun on her birthday from among phool, patti and lots of ped-paude! Have the best life @anushkasharma! There is no one like you!”

Well if you thought Anushka would have let her friend pull her leg, you are mistaken. She replied on the photo, “I know that this picture of you was already in your photo albums ?? .” Arjun was quick to reply, “u were my reference when I made them take this picture… wanted to pay u a proper tribute !!!” When Anushka emphasised on the word ‘tribute’, the Ishaqzaade actor asked the birthday girl to see his feelings and not go into details.

Not letting go, Anushka went on to translate Arjun’s message to her benefit. “details mein jaana is my forte! Your caption alternative- ‘happy birthday Anushka! May the grass on your side always be green and may I always be blessed with your friendship to remind me to water mine !’- there! You’re welcome !,” she wrote. However, Arjun did not want to let his friend have the last word as he further joked, “chal now we know u can be a translator if I ever watch Virat batting with Hindi commentary… thanks a lot…”

Fans could not help but notice the ‘sweet bond’ between the BFFs. Actor Patralekhaa also mentioned, “That’s such a sweet birthday wish??” As Anushka reposted all birthday posts, she shared Arjun’s writing, “Water your lawn pls! Joonbug! Thank you my sweetest friend,” with a heart and hug emoji.

Priyanka Chopra also took to her Instagram story to wish her Dil Dhadakne Do co-star. Sharing a photo with Anushka, the global star wrote, “Wishing you the biggest slice of happy today and always” and added a ‘happy birthday’ GIF on the post. Kareena Kapoor also shared a pretty picture of the actor and wrote, “Happy birthday to my fellow mommy. Stay beautiful.” Parineeti Chopra, on the other hand, had a cute way to wish Anushka as she wrote, “Happpiest birthday my pehli co-star”. Resharing her post, Anushka added, “And the best one yet”. Other actors who wished Anushka Sharma included Alia Bhatt, Athiya Shetty, Genelia Dsouza, Jaideep Ahlawat, Vaani Kapoor, Sonakshi Sinha, Vikrant Massey, Aditi Rao Hydari, Vicky Kaushal among others.