Priyanka Chopra shares a sneak-peek of her ‘good day’ 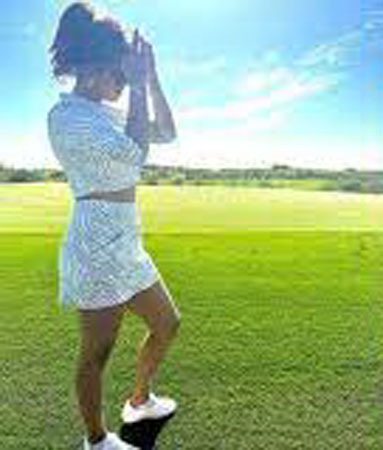 Priyanka Chopra is having a good week. The actor has been treating fans to new set of pictures featuring her with the family or her friends. On Sunday, Priyanka gave a sneak-peek into her time with husband Nick Jonas. Priyanka and Nick went out golfing on Sunday, and the actor did have a good time. Sharing the new set of photos, Priyanka wrote, “It was a good day.” Her post received Nick’s comment, which left the couples’ fans in awe. “Why are you so hot?” read Nick’s comment. Fans also agreed with Nick’s comment and called him a lucky man. Many of their admirers dropped heart-emojis in the comment section.

Earlier this week, Priyanka shared photos of herself lazing in the pool, which received Nick Jonas’ comment. Nick wrote “Damn” with a fire emoji, expressing his admiration for Priyanka. The actor had shared two photos and captioned them as “Instagram vs reality.” While in one, she posed like a model, other had her laughing out loud. The pictures were taken by her good friend Cavanaugh James.

Priyanka, this week, also attended Vir Das’ show in Los Angeles. “What a day! With Awesome friends watching an awesome friend do what he does best! @virdas you r so brave and so inspiring to me! Not to mention had me in tears laughing!! Thx for having us,” she heaped praise on the stand-up comedian and actor. In response, Vir Das wrote, “Thank you for coming! Thank you for opening all the doors for the rest of us. And thank you for always being awesome and cool and funny! I admire you so much.”

On the work front, Priyanka has Citadel, All Coming Back To Me, Ending Things to her credit. As a producer, she signed multimillion-dollar first-look tv deal with Amazon Prime Video. She is also set to star in Bollywood film Jee Le Zaraa alongside Katrina Kaif and Alia Bhatt.