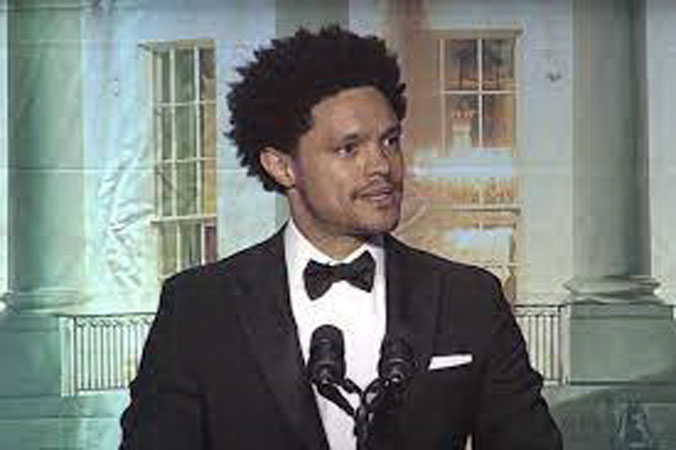 The Daily Show host Trevor Noah was the featured speaker at the White House Correspondents’ Dinner 2022 with POTUS Joe Biden in attendance. Trevor’s routine was much in line with his comedic style as he landed some digs at politicians, and did not spare the attendees as well. Since Trevor was doing comedy in a room full of powerful people and celebrities, he took a moment to land a joke on the Will Smith-Chris Rock incident that happened at the Oscars earlier this year.

“It is risky making jokes these days. I mean, we all saw what happened at the Oscars,” he said recalling the incident where Smith slapped Rock after he made a joke about his wife Jada Pinkett-Smith. He added, “I’ve actually been a little worried about tonight. What if I make a really mean joke about Kellyanne Conway, and then her husband rushes up on the stage and thanks me?”

Will Smith has been banned from attending the Oscars for 10 years. Soon after slapping Rock on stage, Smith won his first Best Actor Oscar for King Richard. He was recently spotted at the Mumbai airport, and while many believed that he was here to visit Sadhguru’s Ashram, that was not the case. Sadhguru’s media relations team previously told indianexpress.com, “Sadhguru is on a global tour to promote Save Soil Movement. Sadhguru has not met Will Smith recently.”

Born in South Africa, Trevor Noah is a comedian. Noah is primarily known for hosting his satirical show The Daily Show. He took over the position from Jon Stewart in 2015, and has since been the host. The comedian has done various comedy specials and has won a Primetime Emmy Award from eleven nominations.

Noah recently hosted the Grammy awards. This was his second consecutive year hosting the biggest award night in the music industry.