* Imran Khan says Farah is 'innocent' and case against her is 'totally wrong'
* PML-N, PPP to give themselves NRO-2 to end corruption cases
* Nothing more embarrassing than arresting Rashid Shafiq 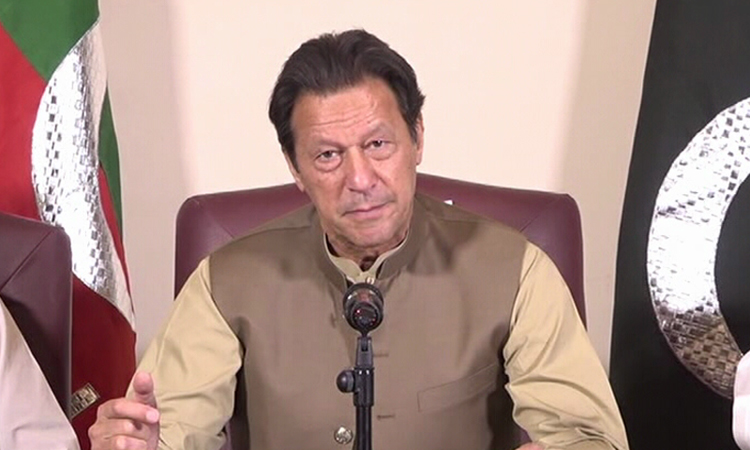 Finally breaking his silence over the corruption allegations against his wife Bushra Bibi’s close aide Farah Khan, former prime minister and PTI Chairman Imran Khan said the case against Farah ‘totally wrong’. “She [Farah] has been in the real estate business for 20 years,” Imran said Sunday while addressing a press conference in Islamabad.

He said that his ex-wife Jemima Goldsmith had been booked in a case related to the smuggling of antique tiles as well, adding that his wife Bushra Bibi doesn’t have any bank account. The PTI chairman said that initiating these cases is intended at attacking him, reiterating that Farah is innocent. “It was implied Farah’s riches exponentially grew during three years […] real estate business has generated a lot of money during the last three years,” he said.

“They say that the National Accountability Bureau is independent. First of all, I ask NAB if a case can even be built against Farah Khan or not?” Imran questioned.

He said that the term “wealth beyond known sources of income” applies to public office holders only. Imran went on to say that the thing that they based the case on is that Farah’s husband was an official of a union council from 1997 to 1999. “She [Farah] wasn’t even married to him at that time. How did they book her in the case,” he objected.

Imran said that he wants to put the cases against the PML-N and PPP leaders before the nation on the white paper.

He said that all the cases these politicians are facing are from 2008 to 2018, while in PTI’s regime, there was only one Federal Investigation Agency graft case worth Rs16 billion.

The PTI chairman condemned the arrest of Sheikh Rashid’s nephew Sheikh Rashid Shafiq and said that “there is nothing more embarrassing than what they did to Shafiq.”He claimed that the party members were celebrating the prayer ceremony and they got to know what happened in Masjid-e-Nabwi PBUH.

“Shame on them who are accusing us of ordering hooliganism in Madina,” he said. He further stated that the government doesn’t have an idea about “how angry Pakistanis are with them.” “The same will happen to them when they will go to people as half of the nation is supporting PTI after seeing their faces.”

Imran said that the Election Commission of Pakistan (ECP) must take action if the CEC does not hold the elections within 90 days in line with the Constitution. Moreover, he said that PTI will record peaceful protests in Islamabad and families would attend them too.

In response to a question regarding the charges of blasphemy filed against him and party leaders over the incident at Masjid-e-Nabwi, the PTI chairman condemned the action deeming it “foolish”.

The former PM stated that the behaviour of the Pakistani pilgrims was a reaction to the “rage” felt by citizens over the ruling coalition government.

He claimed that the country’s leaders operated as a “mafia”, that “buys loyalties” or resorts to pressing charges.

“They [the coalition leaders] will be treated like this in any country that has Pakistanis,” he furthered, adding that “we were offering our prayers at the time this incident took place, they should be ashamed of accusing us.”

Presenting his white paper on the corruption charges against the Pakistan Muslim League-Nawaz (PML-N) leadership, Imran Khan said that Prime Minister Shehbaz Sharif is on bail alongside his son Chief Minister of Punjab Hamza Shehbaz on charges of money laundering,

Accusing the PML-N leaders of “robbing the country for 30 years”, the former PM clarified that no corruption cases were filed against the ruling coalition during the PTI’s tenure.

“All cases of the Sharif family were established from 2008 to 2018. In our time, the NAB was an independent body,” Imran said, adding that the Federal Investigation Agency (FIA) filed only one case against Shehbaz Sharif during the PTI’s tenure, for funnelling money to his domestic staff’s accounts.

The former premier said that there are cases pending against PM Shehbaz with the FIA, amounting to Rs16 billion.

He accused the PML-N leaders of interfering with the investigative authorities, stating that the officers and prosecutors involved in the cases have been “exchanged” or barred from going to court.

“They [the government] will destroy the records, they are only concerned about eliminating their cases of corruption,” the ousted prime minister claimed.

The PTI chairman revealed that apart from the Panama Papers leak, the Sharif family has hidden properties and a total of 16 cases worth Rs40 to 45 billion are pending.

“These cases are just the tip of the iceberg,” Imran claimed.

The PTI chief said he was presenting the white paper so that the nation could know that all of the ruling coalition’s corruption cases started in their own tenures, from 2008-2018 – apart from the FIA cases.

The ex-PM said Nawaz Sharif and Maryam Nawaz are on bail in the Panama Papers case. “Hassan and Hussain fled the country during their tenure,” he added. “When they were asked to give a reply, they said they are not Pakistani citizens.

“There is no example of this. A three-time prime minister had three properties in London. Their businesses are abroad and their sons say they are not Pakistanis. This is only what has been found in the inquiry, this is the tip of the iceberg.”

The former prime minister said there are several money laundering cases involving billions of rupees against the ruling coalition. “So who are these people? They are the ones who have looted us for 30 years.”

The PTI chairman alleged they took money on their servants names and sent it abroad. He said: “Now they have transferred the investigator and the IOs (investigating officer) have been removed from the case. The special prosecutor has been told not to come. They have kept the record with themselves […] this is what happened when Musharraf gave an NRO to Zardari.”

Then they have four NAB cases on Shehbaz, Hamza and Suleman, he said. In another case, he said a drain was built towards Ramzan Sugar Mills “using the public’s money”. “This is a straight forward corruption case,” he stressed.

He alleged PM Shehbaz Sharif, when the Punjab chief minister, used the premier’s plane and went on a number of foreign and domestic trips.

The PTI chief voiced apprehensions that the record of corruption cases against the ruling coalition members would “disappear” soon.

He termed what he said was the government’s move to quash graft cases against itself and coalition members as “NRO II”, warning that the current rulers would “resume laundering money abroad to further dent the national economy”.

“The imported government has been imposed on us and they are going to start the corruption business once again,” he alleged.

The ex-premier mentioned the FIA cases against the “two families”, and regretted the “justice system of Pakistan could not take those cases to its logical conclusion”.

To a question, Imran said his march on Islamabad will be the “biggest ever” in the history of Pakistan. He has on previous occasions expressed his wish for two million supporters to flood Islamabad on his call.

“I want Pakistan to understand that this will be the biggest movement. The people are ready, they will come if we give the call today, but I want it to be the biggest in history.”

However, he insisted the march would be “peaceful”. “When we march, you will see that women, children and families will come out,” he added. “They are saddened by what has happened in the country.”