Amanda Bynes apologises after accusing Paul Michael of drug use 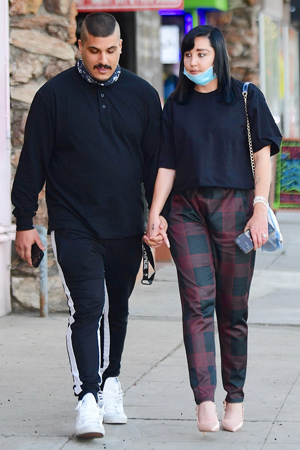 Amanda Bynes is apologizing after making some serious accusations about her fiancé, Paul Michael, during a verbal dispute that prompted a police call.

On Thursday, April 28, the Hairspray actress-turned-rapper took to her Instagram Story to allege that Paul had relapsed on drugs. He denied this in a statement to E! News, saying he was “not using now.” Amanda later issued a “correction,” saying that Paul tested negative on a home drug test. “I thought Paul relapsed, but I was wrong,” she told E! News in an exclusive statement. “He drug tested for me from a drug test kit I bought from CVS. The drug test was negative for all substances. Paul and I are staying together. I am so sorry for the confusion I caused.”

Citing LAPD sources, TMZ reported earlier in the day that Paul called the police that morning, telling them that Amanda kicked him out of the house amid a verbal dispute.

A Los Angeles Police Department spokesperson told E! News: “Officers responded to a call about a verbal dispute around 2:30 in the morning. They met and spoke with both parties and stood by as one of the parties gathered their belongings and left the location. No arrest was made.”

Amanda’s lawyer, David Esquibias, told E! News in a statement, “Amanda and Paul had an argument Wednesday evening. Amanda left her home, where Paul has been residing, for her safety before the situation escalated. She was not there when police arrived.” The attorney said Amanda is “now back home” and “remains focused on her well-being.” In an Instagram Story video shared Thursday morning, Bynes said, “Paul told me that he stopped using his medication. I looked at his phone and he was looking at mom and son porn…I forgot to mention, I found Paul’s stash of crack cocaine. He’s been using for the past six months. He needs serious help. I kicked him out of my house.”

Paul told E! News in a statement, “Amanda thought I had a stash. I do not use drugs and it was a big misunderstanding.” Amanda later posted a new video, saying, “Correction: Paul looked up ‘MILFs.’ ‘Moms and sons’ just popped up. Also, I went to CVS, bought a drug test. Paul tested clean. Paul’s clean. Also, I had something in my teeth in my last video.” She told E! News in her statement, “I misunderstood what Paul looked up online, it was ‘MILFs’ in the search engine, and that brought up other content.”

In his own statement to E! News, Paul wrote, “I am now sober from a relapse that may have happened long in the past but I am not using now. I drug tested and it was negative. The drug test was clean. The relapse was not any significance or a controlled or illegal substance. I am clean for many years. I called the police to collected my belongings that I needed. I have worked it out with her. We’re together and moving past this moment.” The couple’s dispute comes a month after Amanda’s conservatorship, managed by her mother, was terminated after nine years. It was first implemented in 2013 following the former actress’ 5150 psychiatric hospitalisation. Paul and Amanda began dating in late 2019 after meeting in rehab. After keeping out of the spotlight for years, she returned to Instagram in 2020 and soon announced their engagement. The two have recently collaborated on music. This month, Amanda and Paul released two singles together, most recently the song “Fairfax.”