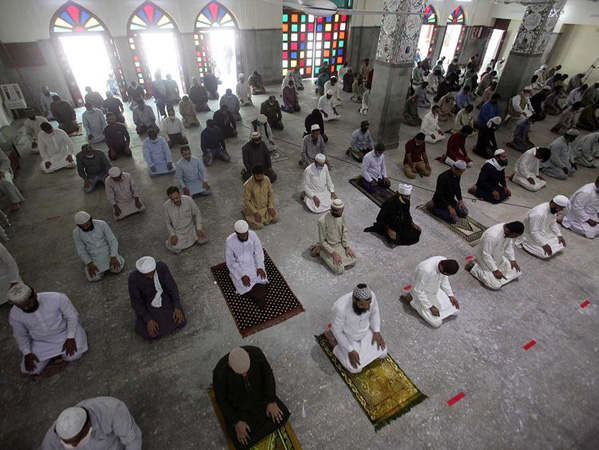 ISLAMABAD: The historic 120-year-old Markazi Jamia Masjid of Rawalpindi is facing an acute water shortage and lack of patronage of the Evacuee Property Trust Board (ETBP) as the maintenance and basic amenities were managed on self-help basis.

The grand mosque was constructed back in 1903 by the influential Muslims and Pir Mehr Ali Shah of Golra to provide a proper platform for the Muslims to hold Eid and Jumma prayers as there was no such big religious place at that time.

The Mosque’s Khateeb Hafiz Iqbal Rizvi told APP that the mosque had a vast courtyard with a beautiful wide mountain in the middle that was lying dysfunctional due to lack of water supply.

The Mosque’s main building had three large domes with long spires or finials and over a dozen minarets of different sizes painted in white and blue, he added.

He told that the Mosque’s renovation was managed through the charity and donations of the masses on self-help basis and the water availability was ensured through WASA’s water tankers.

He informed that the Mosque was an irresistable tourist attraction and religious spot as people in swathes gather at Jamia Masjid to offer Eid and Jumma prayers.

“Jamia Masjid needs to be given due attention to keep it preserve for the coming generations,” said Khalid Bhatti a faithful observing Eitekaf during Ramzan for past 35 years.

He told that the Mosque has a huge prayer area and dozens of people used to observe Eitekaf at the Jamia Masjid but due to post-pandemic situation the number has significantly dropped. “Interestingly, the mosque’s design is the replica of Al-Aqsa Mosque with a blend of local Mughal style.”

Irfan Ahmed, a local resident said the tile works and frescoes painted in intricate patterns at the interior of the Jamia Masjid are the true beauty of the mosque. “The architecture of Jamia Masjid resembles to that of other grand mosques built by Mughal Emperors which also makes it a center of attraction”, he added.

The area residents urged the EPTB and quarters concerned to pay heed to the national heritage and religious asset of the country and preserve it for the coming generations as a symbol of pride.