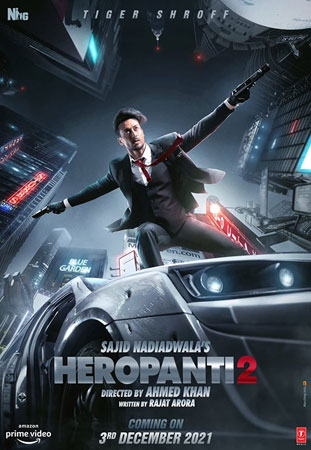 The first ‘Heropanti’, which came out in 2014, was Tiger Shroff’s debut. The terribly tacky, dated plot notwithstanding, it was clear that a new star had emerged. With his athletic build, ripped abs and trippy moves, Tiger held out a youthful, millennial appeal which looked all set to travel much farther than his father, Jackie, ever had.

Eight years on, the sequel ‘Heropanti 2’ proves just how little mainstream Bollywood has shifted in terms of plot and treatment. Tiger’s Bablu is now a hacker and hackster extraordinaire, with a complicated backstory. And this time around, he has gone global, ranging from Yorkshire, to Egypt, to China, to Varanasi. But not even the super-agile Tiger can leapfrog over a worn, moth-eaten storyline which involves one number loving mother (Amrita Singh), mandatory romantic interest, Inaya (Tara Sutaria), and the extremely evil Laila (Nawazuddin Siddiqui) and his multi-national, multi-racial cohorts.

Actually, there really is no plot. It’s basically a series of set pieces featuring Bablu prancing, romancing, and dancing, when he is not mowing down bunches of baddies. Even going by the low standards of leading ladies in such movies, Inaya touches a new low with the gutter language she is made to spout: how is it even admissible in a film meant to be family-friendly? Everything below the belt is up for grabs, and that’s meant to be funny.

How do you hack into every single Indian’s bank account on the same day? That is the challenge held out to our hero, as is the desirability of being a ‘deshbhakt’. How can a mere Bollywood hero resist? He uses ludicrous passwords, and whistle-worthy lines like ‘Bablu dhoondhne se nahin, kismat se milta hai’. It’s not as if Tiger doesn’t work hard. Apart from the fancy cars that he gets to crash into (sleek Lamborghinis seem to have taken over that old Bollywood favourite, the Ferrari), he emerges, sexily smudged but intact from amongst exploding hand-grenades, his shirt neatly ripped to show us the real rips.

But the ‘seeties’ are reserved for the villain in this ‘heropanti’ part two. As the campy, kohl-rimmed, lipsticked Laila, Nawaz is full-on, embracing the silliness of his role to match the tone of the movie. Too bad he’s the only one: even Tiger is now looking same-old.