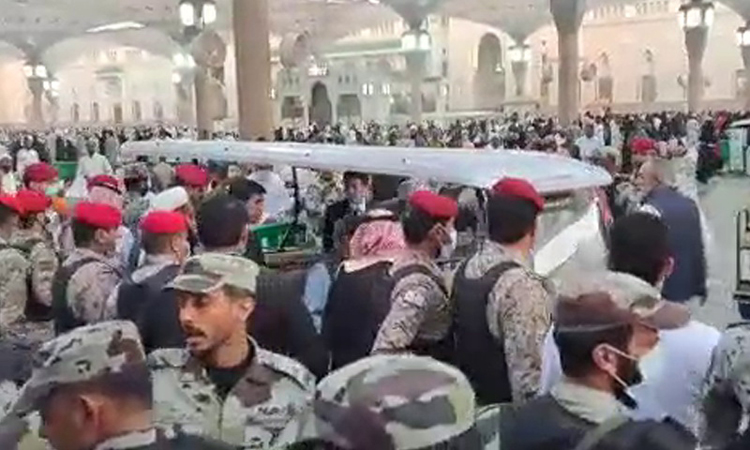 Saudi authorities have detained at least five Pakistani pilgrims who confronted and chanted slogans against Prime Minister Shehbaz Sharif and his delegation outside Masjid-e-Nabwi (PBUH) in Madina.

The spokesperson for the Saudi Embassy in Islamabad Friday confirmed the development saying some of the protesters were arrested for violating the regulations and disrespecting the holy place. The premier arrived in Madina on Thursday on a three-day official visit with his cabinet members and parliamentarians.

Angry protesters, apparently supporters of the PTI, gathered around PM Shehbaz and his delegation and shouted slogans of “thieves” and “beggars” – one of the pictures captured on the scene showing the premier sitting in a vehicle visibly perturbed by the incident.

In a series of videos doing the rounds on social media, the miscreants can be seen specifically targeting Narcotics Minister Nawab Shahzain Bugti, calling him “shameless” and a “lota”. In fact, one of them even grabbed him by his hair, says a news report. Reacting to the unfortunate incident, Aurangzeb said: “I don’t want to name the person responsible for this incident because I don’t want to use this holy land for political purposes.”

“However, it will take time for us to fix the ways in which these people have damaged our society and we can only do that through a positive attitude.” She further added that the PML-N leadership has instructed its workers to control their emotions. Following the incident, political and religious leaders and people belonging to different sections of the society also expressed their outrage at the incident and strictly condemned the chanting of political slogans at the Masjid-e-Nabwi (SAW).