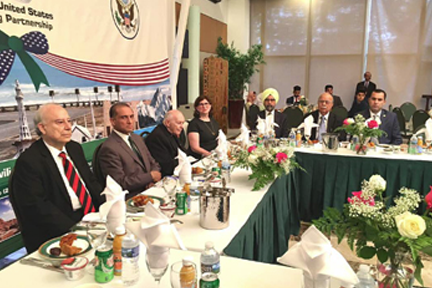 NEW YORK: Pakistani-American men and women holding senior positions in public and elected offices were honoured at an Iftar-dinner hosted Thursday by Pakistan’s Consul General in New York, Ayesha Ali, who called them “role models” for the next generation of leaders.

“This consulate general is your home (it’s) the territory of Pakistan,” she told a large gathering of the Pakistani community members, diplomats from Turkey, Qatar, and UAE as well as representatives of different religions.

“We will continue to support you,” the consul general added.

Ayesha Ali said the number of senior Pakistani-Americans  in public and elected offices continued to increase last year, while 2022 has been a year of “firsts”, among them, Ahsan Chughtai, senior advisor to New York City Mayor;  Asim Rehman, commissioner and chief administrator Law Judge of Oath;  Shama Haider and Sadaf Jaffer, Assembly members in New Jersey and Zahid Quraishi , the first US federal judge.

“You have been in the vanguard of presenting tolerant, universal and peaceful spirit of Islam,”she said while introducing them. “I thank you for your service and for being the tremendous role models that you are.”

The consul general said strong community was the real foundation of a strong Pakistan-US partnership. “Thank you for all you do for Pakistan”.

Ayesha Ali said while celebrating Ramazan, less fortunate people like “our Kashmiri brother and sisters” in Indian occupied Kashmir should not be forgotten. Their rights have been trampled upon by the Indian occupation forces since 1947.

“This Ramadan, our thoughts and prayers are in need to be heard and assisted, the world over.”

The event wound up with a “dua” for the solidarity and integrity of Pakistan and well-being of the people.