Portable Magic by Emma Smith — a love letter to reading 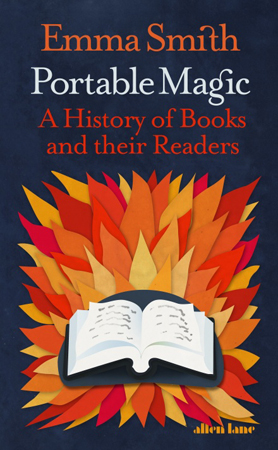 One of the most familiar visual tropes to emerge from the pandemic has been that of Serious People seated in front of their bookshelves. Whether it’s a cabinet minister on television or an accountant working from home, the poetics of Zoom insist on a backdrop of titles composed of equal parts stuffy professional manual, well?thumbed Penguin Classic and, for those who like to raise the stakes, last year’s International Booker prize shortlist. Books don’t just furnish a room, they semaphore to the world exactly how you yourself would like to be read.

In this brilliantly written account of the book-as-material-object, Emma Smith explains that people have been posing in front of their libraries ever since Gutenberg started cranking up the printing press. Before, in fact: one of her earliest revelations is that people in China and Korea were printing books several centuries before sluggish northern Europe got round to it. Still, one of the most deft proponents of the early “shelfie” was Jeanne Antoinette Poisson, also known as Madame de Pompadour, companion of Louis XV. In the 1750s, when Jeanne was making the tricky move from maîtresse-en-titre to femme savante, she enrolled her favourite painter, François Boucher, to manage the transformation. From now on he was to paint her either against a backdrop of crammed bookshelves or, better still, actually reading a book and looking thoughtful about it.

Boucher was careful to give bookish Jeanne the same creamy décolletage and luscious sweep of a silk gown that featured in her early publicity portraits, on the grounds that there was no reason why a woman couldn’t be clever and sexy too. It was a message that Marilyn Monroe took to heart when in 1955 she posed for the famous photograph taken by Eve Arnold, in which she wears a swimsuit while absorbed in Ulysses, a novel often described as unreadable. The following year Monroe would marry playwright Arthur Miller, prompting Variety’s famous headline: “Egghead Weds Hourglass”. Monroe’s “shelfie”, then, functions along similar lines to Madame de Pompadour’s careful self-staging as she transitions from pin-up to public intellectual.

In Portable Magic – the phrase is borrowed from Stephen King – Smith’s subject is the materiality of reading, or what she calls “bookhood”. Books in their physical form turn out to be endlessly adaptable, not just in the domestic space as doorstops, yoga blocks, and occasional kindling when times are tough, but out in the world too. In the first world war, pocket-sized Bibles were clad in full metal jackets in the hope that, carried close to the heart, they might save a soldier from enemy fire while also saving his soul. More mundane is the revelation that, at the beginning of this century, fragments of some 2.5m copies of Mills & Boon novels were used to create an absorbent, noise-reducing layer for surfacing the M6 toll motorway in the Midlands. This, though, should not be taken as a comment on commercial romantic fiction: Smith reminds us that being turned into substratum, or something like it, is the fate of most books, high or low. Her own publisher, the esteemed Penguin Random House, runs a large “centralised returns processing site” in Essex which shreds, crushes and bales around 25,000 of its own books every single day.

More joyous altogether is Smith’s retelling of the creative intervention perpetrated by Joe Orton and his lover Kenneth Halliwell on their library books in the late 1950s and early 60s. Each week the men would take out the lustreless novels available from their local Islington branch and spend the intervening weeks snipping out the cover images and patching them up with something surreal before returning the books for circulation. Phyllis Hambledon’s 1960 bodice ripper, Queen’s Favourite, had its cover repurposed so that, instead of a young wasp-waisted woman in a ruff, the main figures were now two bare-chested male wrestlers. In a study of John Betjeman the photograph of the straw-hatted poet was replaced with one of a pot-bellied and heavily tattooed man in his underpants. Orton and Halliwell also had their way with blurbs, so that the inside flap for Gaudy Nights hailed Dorothy L Sayers “at her most queer, and needless to say, at her most crude!”

Smith reads Orton and Halliwell’s actions as a kind of queer performance art. They were not vandals or, at least, that is not all they were. The books they roughed up were mass-produced and easily replaced – this was not the literary equivalent of drawing moustaches on old masters. Rather, the men were engaged in a protest against the relentlessly middle-brow, heteronormative pap on offer to the citizens of Islington. Within a couple of years, Orton wrote Loot and Entertaining Mr Sloane, the avant garde plays that shook up a British theatre that was already bored with the kitchen sink dramas of the late 1950s. Still, Orton believed that the reason he and Halliwell were sentenced to six months’ imprisonment was because they were gay at a time when homosexuality was illegal. The Daily Express reported, on the same page as the Orton-Halliwell book trial, that a drunken driver who had killed his passenger received the same sentence as the book vandals of Essex Road.

When the muddle-headed puritans worried about the “poison” that Orton and Halliwell were releasing into the body politic they were drawing on ancient terrors about the book as a vector of disease. As late as 1907, public health authorities decreed that any volume from a household recently visited by smallpox, cholera or tuberculosis should be disinfected, if not destroyed, for fear that it might carry contamination far and wide. Smith is quick to see a parallel here with the early days of the pandemic, when government guidelines warned that books that had been bought online should be quarantined for 72 hours before being deemed safe to handle.

How thrilling, then, to learn that this principle can also work the other way round. Smith explains that ancient volumes are now being harvested for accumulated DNA – skin cells and traces of nasal mucus from sneezes – left behind by early readers. At one level this allows us to glimpse people from the past as they lean over a particular volume: the detritus from a 1637 American Bible recently revealed the DNA of a northern European reader who suffered from acne. More therapeutically, plans are in play to swab old books to gather genetic material that predates modern medical problems such as antibiotic resistance.

Portable Magic is a love song to the book as a physical object. In tactile prose Smith reminds us of the thrills and spills of shabby covers, the illicit delight of writing in margins when you have been told not to and the guilty joy that comes from poring over traces left by someone else. It is these haptic, visceral and even slightly seedy pleasures of “bookhood” that she brings so brilliantly to life.