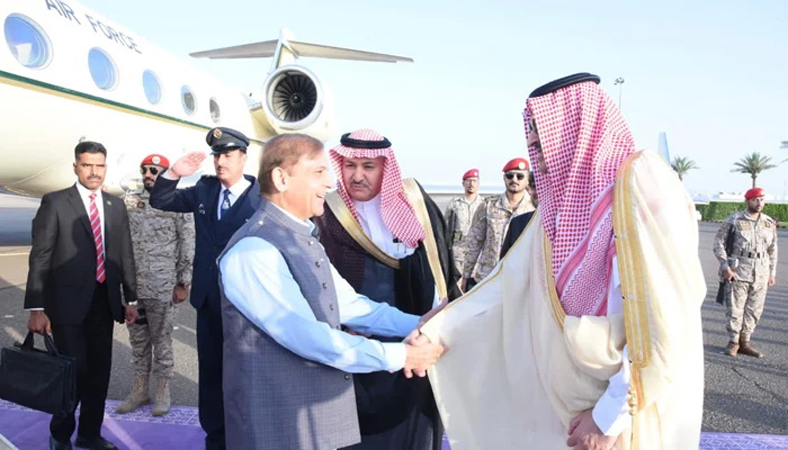 Prime Minister Shehbaz Sharif on Thursday arrived here on a three-day visit to Saudi Arabia from April 28-30, on the invitation of Saudi Crown Prince Mohammed bin Salman bin Abdulaziz. This is the prime minister’s maiden visit abroad after assuming the office earlier this month.

Prime Minister Shehbaz Sharif said he looked forward to his meeting with the leadership of Saudi Arabia in a bid to review the multifaceted bilateral cooperation and taking the special relationship to new heights. In a special video message prior to leaving for Saudi Arabia on a three-day visit, he expressed pleasure that after assuming his office, Saudi Arabia was the first country of his maiden visit. “This reflects the high importance Pakistan gives to its special relationship with Saudi Arabia, which is historic in nature and also strategic in importance,” he said. He expressed gratitude to the Crown Prince of Saudi Arabia Muhammad Bin Salman for his gracious invitation for the visit. He said Pakistan and Saudi Arabia were bound by deep-rooted and abiding fraternal ties, which were built on the solid foundation of mutual trust and support.

He said the people of Pakistan held the Custodian of the Two Holy Mosques in high esteem. “We are profoundly grateful to Saudi Arabia for its consistent support in difficult times,” he said.

He said Pakistan had always stood with Saudi Arabia at different occasions and “would always stand with our Saudi brethren”. He said the visionary Saudi leadership had worked assiduously for the people of Saudi Arabia, adding that Pakistan took pride in the remarkable achievement of Saudi Arabia within the framework of the Crown Prince’s visionary 2030 project.

He commended the leadership role of Saudi Arabia among the Muslim Ummah and for its deep commitment to the Muslim cause. He also conveyed his best wishes for the Pakistani expatriates in the Kingdom for always contributing enormously to the economic development of Pakistan.

He said the Pakistani diaspora was a key partner in further fortifying the Pak-Saudi relationship. Meanwhile, the Foreign Office in a statement said: “The prime minister’s visit to Saudi Arabia will impart a strong impetus to deepening bilateral cooperation in diverse fields and further reinforce the growing partnership between the two countries.”

Pakistan and Saudi Arabia are bound by a fraternal relationship marked by mutual trust and understanding, close cooperation, and an abiding tradition of supporting each other. The people of Pakistan hold the Custodian of the Two Holy Mosques in the highest esteem. The bilateral relationship is complemented by close mutual collaboration at regional and international fora. Saudi Arabia is a member of the OIC Contact Group on Jammu and Kashmir. The Kingdom of Saudi Arabia is home to more than two million Pakistanis, contributing to the progress, prosperity, and economic development of the two brotherly countries. The regular high-level visits are a key feature of this special relationship.

Minister for Information and Broadcasting Marriyum Aurangzeb said Prime Minister Shehbaz Sharif’s historic visit to Saudi Arabia would open up a new chapter in exemplary friendship between the two countries. She said the visit was a manifestation of a historic relationship based on brotherhood, warmth, and mutual trust.