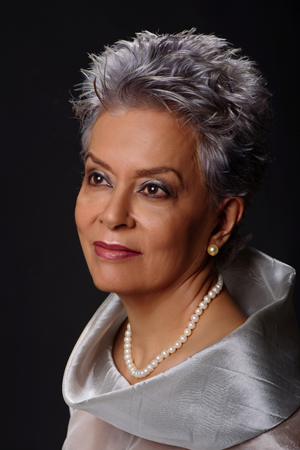 Fashion designer Maheen Khan clearly has had enough of what passes for fashion for desi men and frankly, we can’t blame her.

She took to social media to announce the launch of her new “men’s line for the fashion savvy” – the designer’s personal crusade against the cringe and boredom of high-fashion menswear.

Khan’s new menswear line Gulabo Gentlemen has been launched with a purpose. “Launched a men’s line for the fashion savvy, only because I’m so bored with the way they dress,” the designer posted on Twitter. “Those tight body-hugging kameezes where every seam is stretched to bursting point or the poorly cut kameez that rides up in front. Like it or hate it, has to be said.”

Khan described Gulabo Gentlemen as an “unparalleled collection for the avant-garde set, who dare to go against the mainstream”.

The collection’s most eye-grabbing item is what Khan has dubbed a “shant” – a cross between a classic shalwar and pants. “Don’t like shalwars? Wear a Shant. Shalwar trouser with the deepest of pockets, comfortable and easy to carry off with a short kurta too,” Khan explained.

Still confused about what how a “shant” actually works? This video by Gulabo Gentlemen is here to help.

In case the “shant” isn’t up your alley, Khan’s menswear line offers other clothing items as well. Behold, unisex kurtas.

Some netizens were pretty excited about what Khan’s new line had to offer.

Others were a little sceptical about this whole “shant” business, amongst other things. Are you willing to give Khan’s new menswear line a try?