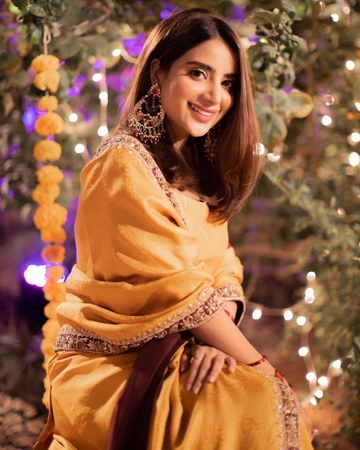 Showbiz actors Saboor Aly and Mariam Ansari strike a pose for a picture during their recent meetup. Turning to her Instagram stories earlier this week, famed actor Saboor Aly shared a series of pictures with fellow showbiz celebrity and her sister-in-law Mariam Ansari. The duo can be seen twinning in ethnic outfits for what seems like a family Iftar dinner.

For those unversed, Saboor Aly tied the knot to actor Ali Ansari earlier this year, who is the only brother of Mariam Ansari. Later the same day, the ‘Amanat’ actor shared a three-picture gallery on the photo and video sharing site, showcasing her ‘look of the day’. The shared clicks – which see Saboor in a pastel green Chikankari Kurta with some oxidized Jhumkas and choker – had a single leaf emoji as the caption.

For those unversed, Saboor Aly tied the knot with actor Ali Ansari earlier this year, who is the only brother of Mariam Ansari

The picture got thousands of likes from Instagrammers, while a number of users of the social application including the beloved husband Ali Ansari, and BFFs Sadaf Kanwal and Sara Ali dropped lovely compliments on the post.

Saboor Aly shares a friendly bond with her sister-in-law Mariam who also played cupid between her and Ali as revealed by the former. They have worked together in superhit serials ‘Mujhe Vida Kar’ and ‘Mubarak ho Beti Hui Hai’.