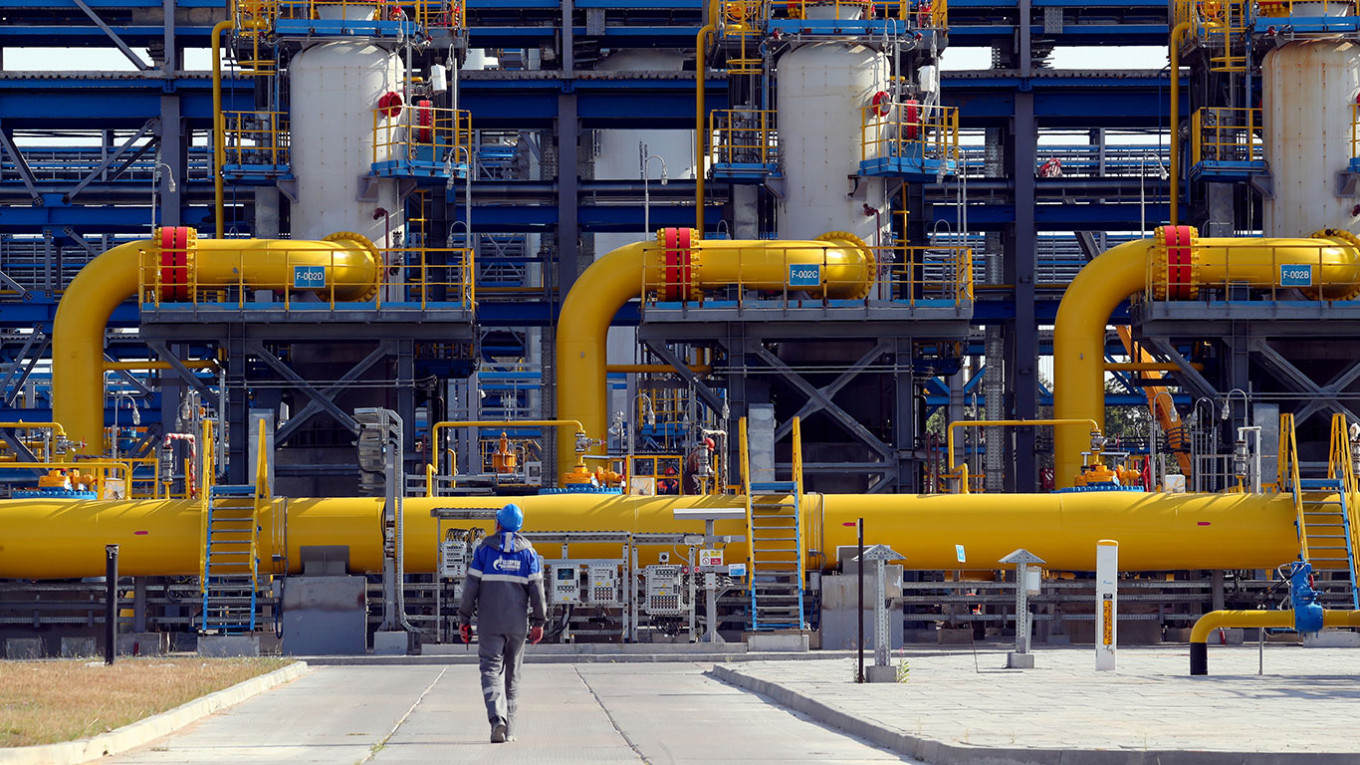 Russia will halt gas shipments to Poland and Bulgaria on Wednesday, after blasts in a breakaway region of neighbouring Moldova led Kyiv to accuse Moscow of seeking to expand the Ukraine war further into Europe.

The Russian energy giant Gazprom told Poland and highly dependent Bulgaria that it would cut off supplies, in Moscow’s latest use of gas as a weapon in a conflict that has now dragged into its third month and claimed thousands of lives.

Explosions this week targeting the state security ministry, a radio tower and military unit in neighbouring Moldova’s region of Transnistria — occupied by Moscow’s forces for decades — followed a Kremlin commander’s claims Russian speakers in the country were being oppressed.

That triggered alarm that Moldova could be Russia’s next target in its push into Europe, with Moscow having exploited similar fears after launching its bloody invasion of Ukraine on February 24.

“If Ukraine falls, tomorrow Russian troops will be at Chisinau’s gates,” he said, referring to Moldova’s capital.

Ukraine’s President Volodymyr Zelensky has been lobbying for heavier firepower to push back the Russian advance now focused on the eastern region of Donbas.

Western allies are wary of being drawn into an outright war with Russia, but Washington pledged Tuesday at a summit to move “heaven and earth” to enable Ukraine to emerge victorious.

“Ukraine clearly believes that it can win and so does everyone here,” US Defence Secretary Lloyd Austin told 40 allies gathered at the Ramstein Air Base in Germany.

Britain will also on Wednesday urge Kyiv’s allies to “ramp up” military production including tanks and planes to help Ukraine, with Foreign Secretary Liz Truss set to call for a “new approach” to confront Russian President Vladimir Putin.

“We must be prepared for the long haul and double down on our support for Ukraine,” she is set to say, according to pre-released remarks.

“Heavy weapons, tanks, aeroplanes — digging deep into our inventories, ramping up production. We need to do all of this,” she will add.

“There must be nowhere for Putin to go to fund this appalling war.”

Truss will also urge Europe to cut off Russian energy imports “once and for all” — a move that would deprive Moscow of a key source of leverage over its dependent western neighbours.

Underlining that precarity, Bulgaria — which is almost completely dependent on Russia for its annual consumption of gas — said it had received word from energy giant Gazprom that supplies would be suspended from Wednesday.

Poland’s PGNiG gas firm, too, announced that Moscow would turn off the taps — though its prime minister said gas storage facilities were 76 percent full and that the country was ready to obtain necessary supplies from other sources.

Fighting continues to rage across Ukraine’s east, Kyiv’s defence ministry said, with Russia shelling Kharkiv city and its troops launching an offensive on the town of Barvinkove.

Russia said it had carried out high-precision missile strikes against 32 Ukrainian military targets including four ammunition depots on Tuesday.

It also launched air strikes against 33 targets, as well as 100 artillery and rocket strikes.

In the south, two Russian missiles struck the industrial city of Zaporizhzhia, which has welcomed many civilians fleeing Mariupol, regional authorities said.

Russian forces are expected to soon advance on the city, which is located near Ukraine’s largest nuclear power plant.

And at the site of the world’s world-ever atomic disaster, Chernobyl in northern Ukraine observed the 36th anniversary of the meltdown back under Kyiv’s control.

The sprawling complex fell into Russian hands on the day Moscow’s troops began their invasion in February, suffered a power and communications outage that raised alarm about a possible new calamity at the site.

That put the world “on the brink of disaster”, Zelensky said at a press conference with UN atomic watchdog chief Rafael Grossi, adding that Russian troops’ conduct showed that “no one in the world can feel safe.”

“For the Russian military, the Chernobyl zone and the plant was like a normal battleground, territory where they didn’t even try to care about nuclear safety,” he said.

To the east, at the entrance to Barvinkove, six Ukrainian soldiers were ready at any moment to dive into their trench, which they dig every day with a shovel.

Ukraine officials said there was fighting all along the frontlines in the Donetsk region, and that resistance in the Azovstal factory in the besieged port city of Mariupol was still holding out.

The country’s best-known singer Sviatoslav Vakarchuk made a morale-boosting visit to the eastern front, where a military press officer admitted the situation was difficult.

“Of course, we were prepared for this war, especially the professional army, but for those who’ve been recruited, it’s more complicated.”

The UN’s refugee agency said it now expects more than eight million Ukrainians to eventually flee their country, with nearly 5.3 million already out, and that $1.85 billion would be needed to host them in neighbouring countries.

In a meeting with Putin, UN Secretary-General Antonio Guterres called for Moscow and Kyiv to work together to set up aid and evacuation corridors in war-torn Ukraine.

He also called for an independent investigation into “possible war crimes” in Ukraine.

“I am concerned about the repeated reports of violations of international humanitarian and human rights law and possible war crimes,” Guterres said.

“And they require independent investigation for effective accountability.”

– Putin has ‘hope’ for negotiations –

Russian President Vladimir Putin tells the visiting UN chief Antonio Guterres that he still has hope for negotiations to end the conflict in Ukraine.

“Despite the fact that the military operation is ongoing, we still hope that we will be able to reach agreements on the diplomatic track. We are negotiating, we do not reject (talks),” Putin tells Guterres.

Guterres, who is seeking to mediate in the conflict, is on his first visit to Moscow since the war began and is then to travel to Kyiv for talks with Ukrainian President Volodymyr Zelensky.

Defence ministers of 40 countries hold talks at a US airbase in Germany on boosting arms supplies to Ukraine.

The United States and its allies will meet once a month to discuss Ukraine’s defence needs, US Defense Secretary Lloyd Austin says afterwards.

The United States has been pushing its allies to provide Ukraine with heavy weapons.

US Secretary of State Antony Blinken tells Congress that Putin has shown “no sign” he is “serious” about diplomacy, but by giving Ukraine the means to fight the invasion Washington can help “strengthen their hand” when meaningful talks do take place.

His perceived reluctance to break with Germany’s historic policy of detente towards Moscow had drawn fierce criticism from Kyiv and caused tensions with his coalition partners.

“It took some effort but the Soviet sculpture of the two workers — symbolising the reunification of Ukraine and Russia — was dismantled this evening,” Kyiv mayor Vitali Klitschko says in a statement on social media.

Fears of the conflict spilling over into Moldova rise after a series of blasts in its breakaway Russian-backed Transnistria region, which borders western Ukraine.

Authorities in Transnistria say two explosions on Tuesday morning damaged a radio tower relaying Russian stations near the Ukrainian border, and that on Monday evening the offices of the state security ministry were hit in a suspected grenade attack.

A Russian military chief last week angered Moldova by referring to the “oppression” of Russian speakers in Moldova, an argument used by Moscow to justify its invasion of Ukraine.

French Foreign Minister Jean-Yves Le Drian tells his Moldovan counterpart Nicu Popescu France fully backs the country’s territorial integrity “in the face of the destabilisation risks to which it may be exposed”.

“On April 26, 2022, Gazprom informed PGNiG of its intention to completely suspend deliveries under the Yamal contract… on April 27,” PGNiG said, adding that Poland was prepared to obtain necessary supplies from other sources.

The UN says nearly 5.3 million Ukrainians have fled the country since Russia invaded and warns that three million more could follow by the end of this year.