A woman suicide bomber killed four people, including three Chinese nationals, in an attack on a minibus carrying staff from a Beijing cultural programme at Karachi University on Tuesday.

The Baloch Liberation Army claimed responsibility, saying it was their first suicide attack by a woman assailant. CCTV footage broadcast by local channels showed a woman standing near the gate of a Confucius Institute – the cultural programme that China operates at universities around the world – as a minibus pulls up. When the vehicle gets to within a metre she turns her back on it and detonates a bomb strapped to her body.

The deceased Chinese nationals have been identified as the director of the Confucius Institute Huang Guiping, Ding Mupeng, Chen Sai, and their Pakistani driver, Khalid.

In Charge of the Counter-Terrorism Department (CTD) Raja Umar Khattab confirmed that it was a suicide attack and a burqa-clad woman seen in the CCTV footage was responsible for it.

“A separatist group has also claimed responsibility for the attack,” Khattab said, adding that the terrorists, after surveillance, targeted the vehicle carrying the foreigners. 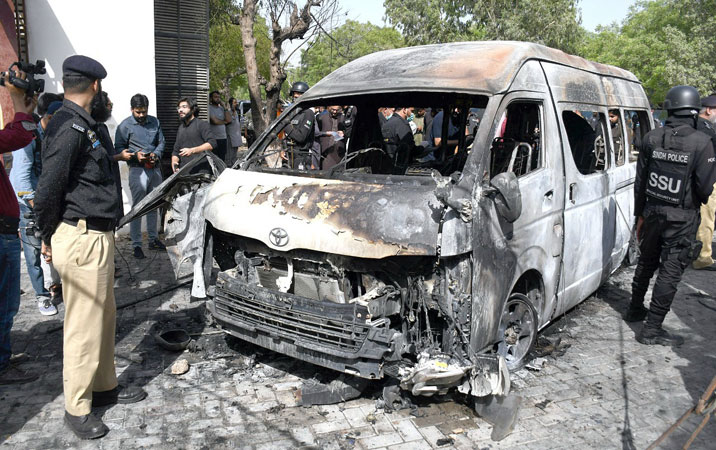 Meanwhile, a police report said that about three to four kilogrammes of explosives were used in the blast. “We were having a meeting at the dean’s office when we heard the deafening blast,” said Naeema Saeed, a professor at the university’s criminology department. “It seemed that the roof was falling or the earth was torn. We all rushed outside. We looked around and saw smoke rising.”

The “Baloch Liberation Army accepts responsibility of self-sacrificing attack”, the group’s spokesman, Jeeyand Baloch, said in a statement published in English on Telegram. The group released a picture of the woman they said was the bomber, naming her as “Shari Baloch alias Bramsh”. She is dressed in military fatigues and a cap, smiling broadly and raising two fingers.

Karachi police confirmed four people had died, including the minibus driver and three staff from the Confucius Institute.

China’s embassy in Islamabad said all three citizens killed in the attack were teachers at the institute, and that a fourth had been injured. It also warned its nationals to pay close attention to security and “not go out unless necessary”. “At the same time”, the embassy said in a statement, “all levels in Pakistan are requested to take practical and effective measures to do everything possible to ensure the safety of Chinese citizens, institutions and projects in Pakistan and ensure that similar incidents do not occur again.”

According to sources, the University of Karachi had sent a letter to the Confucius Institute and had expressed concerns related to the security of the foreign teachers. In the letter, which was sent to the institute 26 days ago, the university had written that the foreign teachers were often seen travelling outside of the university premises without accompanying security personnel. “In case of any mishaps, the university security will not be responsible,” the letter said. Following the incident, the University of Karachi, in a notification, announced the suspension of classes on Wednesday, April 27. Mustajab Hussain, a 25-year-old student hailing from Gilgit-Baltistan, was heartbroken over the death of one of his teachers.

Hussain, who has been studying at the institute for the past three years, said that two female faculty members were among the deceased while the third one was the director, based on the identities shared by the KU spokesperson. The director had just come around a month ago. “Chen Sai was my teacher. Her class was at 2:30pm. She was an amazing teacher and very friendly. Whatever we found difficult, she would always explain very nicely. She was very young, in her early 20s,” he said. According to Hussain, the Chinese faculty members used to live at a guest house inside the KU premises. They were coming from the guest house to the institute when the explosion occurred at the gate. In a statement, FO spokesperson Asim Iftikhar said the government and the people of Pakistan extend their deepest condolences and sympathies to the families of the victims. “The law enforcement agencies are investigating the incident to apprehend the culprits and bring them to justice. Local authorities are also providing all possible assistance to the injured,” he said.

The FO spokesperson termed the incident a “direct attack on the Pakistan-China friendship and ongoing cooperation”. Calling the two countries “close friends” and “iron brothers”, he said Pakistan attached great importance to the safety and security of Chinese nationals, projects and institutions in the country.