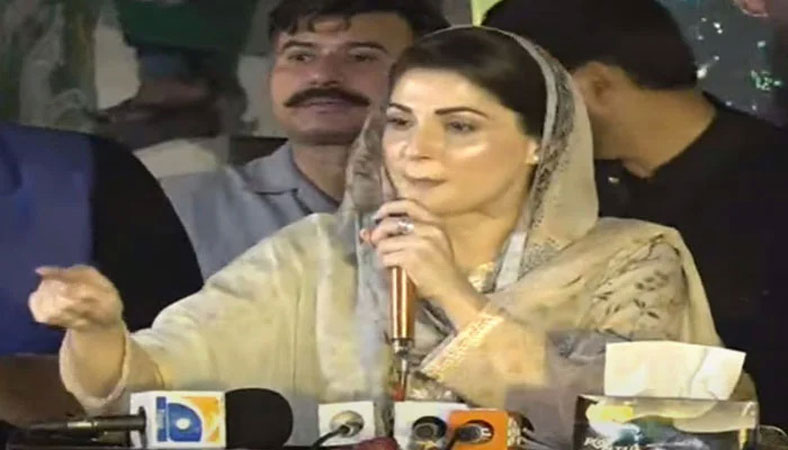 PML-N Vice President Maryam Nawaz on Tuesday took a jibe at her party’s arch rival Imran Khan and said that the PTI chairman, who used to claim that Nawaz Sharif’s politics and government had ended, is now accusing the PML-N supremo of ousting him from power while sitting in London, a private TV channel reported.

“Until yesterday, he used to say Nawaz Sharif’s government and politics had ended. Today he’s saying that Nawaz Sharif ended his government by sitting in London,” Maryam said while addressing a workers’ convention of the NA-128 constituency in Lahore along with Punjab’s Chief Minister-elect Hamza Shahbaz. Congratulating the PML-N workers for getting rid of the PTI-led government, Maryam lauded her party supporters for fighting against destruction.

Maryam told the former prime minister that the gifts he took from the Toshakhana and sold belonged to the state, adding that the PTI chairman did not sell gifts but “sold Pakistan’s ties with other countries” through the move. “Imran Khan you will have to give answers,” said Maryam. She added that the PTI chairman will have to respond to the allegations linking him with Farah Khan, the friend of the former prime minister’s wife. “Imran Khan, you will have to tell what relations did your wife had with Farah Khan,” said the PML-N leader.

The PML-N leader reminded the workers that the former prime minister used to claim that her father’s politics had ended but it was the PML-N supremo’s candidate Shehbaz Sharif who became the PM and Hamza who became the CM. “Niazi, you do not know politics, how will you compete with Nawaz Sharif?” asked the PML-N leader. She added that the PTI chairman feared that if the PML-N government would come to power, then his corruption cases would come out in the open.

On the PTI’s call for fresh elections, Maryam said that the PMl-N did not fear elections as the people’s power was with them. She added that people who fear elections are the ones who pass by “cheating”.

Commenting on PTI chairman’s question regarding the opening of courts at midnight, Maryam said that they were opened as the former prime minister had broken the Constitution. “You started to see PM House as Banigala which is why the courts were opened,” said Maryam.

While hitting out at President Arif Alvi, Maryam said that this was a country of 220 million not his “dental clinic”. “Arif Alvi, if you want to listen to Imran Khan so much, then resign and go home,” said Maryam. For his part, Punjab CM-elect Hamza Shehbaz said that his government would not take revenge from anyone. The PML-N leader told the PTI chairman to stop “crying” about a conspiracy and warned him not to think of staging a sit-in. “Imran Khan used to claim that Usman Buzdar was Wasim Akram plus, but in Niazi’s tenure, the bidding was done for a job of chaprasi up to an officer,” said Hamza. He also warned the PTI chairman to come to his senses and not to make the institutions controversial. “Imran Khan you wasted the nation’s time for 126 days; do not think of staging a dharna again,” said Hamza. He added that the PTI chairman’s politics will be “thrown in the sea” if he does that.