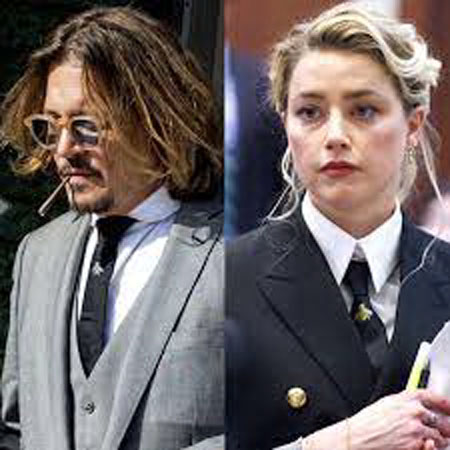 Amid the lengthy court battle between Amber Heard and Johnny Depp, social media users are wrapped up in every single detail-down to the fashion choices. Depp’s $50 million defamation lawsuit against his ex-wife began in a Virginia courtroom on April 11. Five years after the couple broke up, followers of the case are hearing many graphic and upsetting allegations about the couple’s marriage for the first time, including accusations of physical abuse from both parties. But some people are theorizing that there’s more than meets the eye-specifically when it comes what attire Heard has chosen to wear to court. For the first day of the trial, the Pirates of the Caribbean alum showed up to court wearing a gray suit paired with a Gucci tie, with a bee lapel pin. The following day, Heard wore a similar gray ensemble, and on April 13 wore a very similar bee lapel pin and tie to complete her dark-colored outfit. Just a few days later, social media users were buzzing over Depp’s ponytail when he arrived on April 18; on April 19, Heard wore a similar hairstyle.