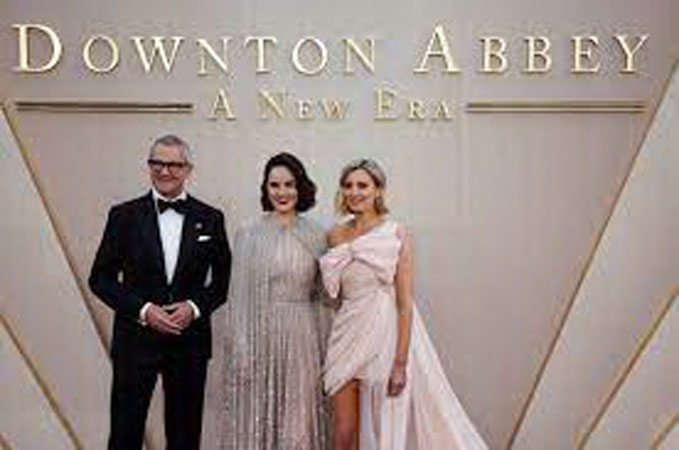 The Crawley family are back, this time with a film that takes place at their famed “Downton Abbey” home as well as the French Riviera in the second movie stemming from the award-winning television series. Released in UK cinemas on Friday, “Downton Abbey: A New Era” sees the return of the fictitious aristocratic Crawley family and their servants who run a sprawling estate in the English countryside in the early 20th century. “We’ve been a familiar group for over a decade and for nearly all of us to be there was remarkable,” actor Hugh Bonneville, who plays patriarch Robert Crawley, told Reuters of filming during the COVID-19 pandemic at the movie’s premiere in London on Monday.

“I appreciated the job far more than I’d ever done before after the experience that the world had been going through, and I think the release now is just a tonic at a time when we need a bit of escapism at this point. This is pure entertainment,” he said of the film.

The movie begins with Crawley’s mother, Lady Violet, played by veteran Maggie Smith, surprising her family with the news that she has inherited a villa in the south of France from a man she met decades earlier.

Led by Crawley, the family travels to France to visit the villa. At the same time back in Britain, a film crew is setting up a movie production at Downton Abbey, delighting the staff but not impressing certain family members. “It’s a really great script and it’s very different. Half the characters go off to France and the rest of us stay at the house and the house is invaded by a film crew and actors,” said Michelle Dockery, who plays Lady Mary, the eldest Crawley daughter.

“It’s a really different type of movie for Downton … and I think the tie to a new era is very much about the world sort of moving on and changing and I think it’s great to see the characters sort of adjusting to that,” she said.

Bonneville, Dockery and Smith, Elizabeth McGovern and Laura Carmichael reprise their roles as Crawley family members while Dominic West, Hugh Dancy and Laura Haddock are new additions to the cast.

“Downton Abbey: A New Era” is the second film to be made from the series, which first aired in 2011. It went on for six seasons and gained a huge following in Britain and the United States. Asked about whether there would be more “Downton Abbey” in the future, writer Julian Fellowes said: “I mean, I’ve said goodbye to these characters so many times. But back and back they come. So who knows really?”