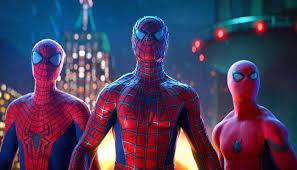 The CinemaCon summit draws Tinseltown executives to giant casino ballrooms each year, where owners of theaters — from global chains to tiny independents — are treated to never-before-seen footage and A-list appearances.

After a subdued edition last August, big-screen operators were back in a buoyant mood, with box office hauls now recovering from successive Covid-hit years — not to mention news that streaming juggernaut Netflix recorded its first subscriber loss in more than a decade.

Theaters have particularly been encouraged by hits like Sony’s recent “Spider-Man: No Way Home” — the third-biggest US box office success of all time, grossing $1.9 billion worldwide.

Phil Lord and Chris Miller, directors of Oscar-winning 2018 animation “Spider-Man: Into The Spider-Verse,” unveiled unfinished footage from the first 15 minutes of their sequel “Across the Spider-Verse,” out next summer.

It featured various male and female Spidey heroes hopping between dimensions — and will be followed by another animated sequel, the newly announced “Beyond the Spider-Verse,” in 2024.

In its opening-night presentation, Sony also presented footage from Brad Pitt action thriller “Bullet Train,” based on a Japanese novel and out in July.

“That’s not my first fight,” joked the chart-topping Puerto Rican rapper, who was also unveiled as the first Latino to lead a live-action Marvel superhero film — “El Muerto,” out in January 2024.

Viola Davis appeared on stage to accept the event’s inaugural “trailblazer” prize — while plugging her upcoming film “The Woman King,” a historical epic about the female warriors of the west African kingdom of Dahomey, out in September.

“I wanted to be a producer who championed those stories with people with a history that looked like me,” said the “Fences” Oscar-winner.

She called the new film — in which she also stars — her “magnus opus.”

Reese Witherspoon appeared by video to introduce her adaptation of best-selling novel “Where The Crawdads Sing,” a creepy drama set around a murder in the North Carolina marshes, out this summer.

The presentation also confirmed new “Ghostbusters” and “Venom” sequels, and ended with a video message from boxing great George Foreman ahead of a new biopic about his career.