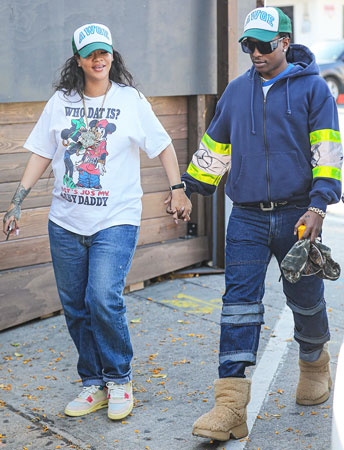 Rihanna and A$AP Rocky stepped out for a date night three days after police arrested the rapper in connection to a 2021 shooting.

The pregnant singer and her partner, who are expecting their first child together, were photographed outside the Santa Monica, Calif. restaurant Georgio Baldi, one of her favorite eateries, on April 23.

The couple’s joint appearance marked the first time they were spotted out together since Rocky, whose real name is Rakim Mayers, was arrested on April 20 on a charge of assault with a deadly weapon stemming from the shooting.

Police took the rapper into custody at Los Angeles International Airport just as he and Rihanna landed on a private flight from her native Barbados following a short trip.

The Los Angeles Police Department said in a statement posted on Twitter that its officers made an arrest in connect with a shooting that occurred on Nov. 6, 2021 in Hollywood, which occurred during an “argument between two acquaintances.”

“The argument escalated and resulted in the suspect firing a handgun at the victim,” the statement said. “The victim sustained a minor injury from the incident and later sought his medical treatment. Following the shooting, the suspect and two additional males fled the area on foot…the suspect has been identified as 33-year-old Rakim Mayers, a Los Angeles resident, also known as music artist A$AP Rocky.”

According to police reports obtained by NBC News, the shooting victim, who survived, told police that the rapper, while accompanied with two other people, allegedly “approached him with a handgun on the street.” The person added that Rocky “shot at him three to four times and believed one of the bullets grazed his left hand.”

Rocky’s attorney, Alan Jackson, confirmed to NBC News that his client had been arrested but offered no further comment.

Multiple law enforcement sources familiar with the matter told the outlet following the arrest that Rihanna was with Rocky when he was arrested and that a search warrant was executed at his home in Los Angeles.

The rapper spent less than three hours in a police jail before he was released after posting a $550,000 bond, according to the LA County Sheriff’s Department booking report. The LAPD said the case would be presented to the district attorney’s office “for filing consideration.” The rapper’s court date is set for Aug. 17.