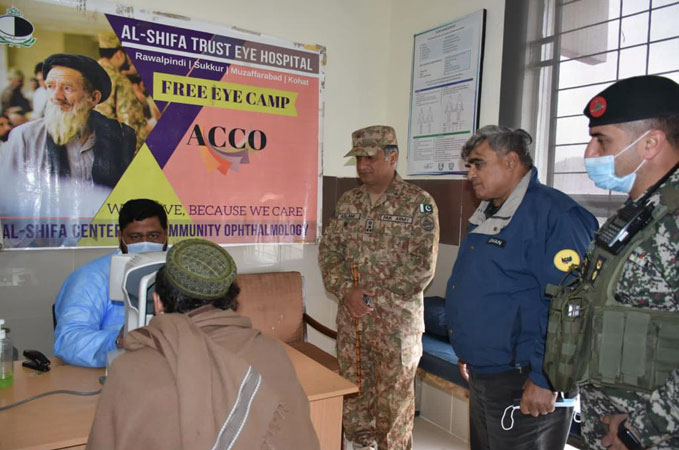 Maj Gen (R) Rehmat Khan, President of Al-Shifa Trust, said this while briefing media persons about the outreach program achievements in 2021-22.He said that free eye camps were held in the underprivileged areas including Loralai, Chaman, Skardu, Chitral, North and South Waziristan and Malakand.

About 17000 children were screened for different eye diseases in girls’ and boys’ schools and surgical camps were established conducting 2500 surgeries, he said.

Rehmat Khan said that Pak Army provided us with foolproof security, transport and other facilities for teams of doctors conducting camps in difficult terrains, he added.

In some areas of South and North Waziristan, Army personnel provided food and accommodation and arranged all other things paving way for treatment and surgeries for the people of remote areas.

The complicated cases from those areas were referred to Al-Shifa Trust Eye Hospital Rawalpindi, he said, adding that the trust started an outreach program in 1992 and its free eye camps cover the whole of the country.Giving details, he said that Al-Shifa Centre for Community Ophthalmology (ACCO) delivers quality eye care at the doorstep of the rural and underserved populations.

The trust runs one of the widest spread outreach programmes for the prevention of blindness and more than one million patients have been treated in rural areas so far including 600 surgeries. On the occasion, Dr Tariq Usman, General Manager of the Al-Shifa Centre for Community Ophthalmology said Al-Shifa Trust will increase the number of free eye camps in the remote areas where the patients lack access and resources for quality medical facilities.

He said that out of the box solutions are needed to deal with the menace of blindness.