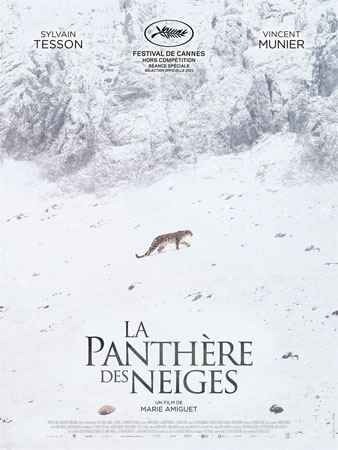 In 2019, French travel writer Sylvain Tesson published The Art of Patience: Seeking the Snow Leopard in Tibet – an account of his travels with the equally renowned wildlife photographer Vincent Munier, searching for the near-legendary snow leopard, as well as foxes, bears and other marvellous animals in the stunningly stark and remote landscape.

This is the film which Munier was co-directing at the time with Marie Amiguet about their experiences together, with music by Warren Ellis and Nick Cave.

The relationship between the two men could easily have been an insufferable teaming-up of macho guys congratulating themselves on their superiority to big city folks and their primal connection to magnificent beasts. But their images have real power, particularly those showing the animals’ mysterious existence in and then emergence from camouflage. Tesson often praises the monkish austerity of Munier’s modus operandi, as he waits for weeks and months in a “blind” in which he may or may not be able to photograph his quarry. “Waiting is prayer,” Tesson says, although he doesn’t reflect on the now ubiquitous use of the camera trap, that modern invention for wildlife specialists which takes the discomfort – and possibly the prayer – out of waiting.

In Tesson, the film has a real writer whose style rises above the cliché into which nature documentary almost always descends. I enjoyed this documentary for the way it keeps human beings within the picture and doesn’t create a world in which animals exist on their own, with the humans’ presence saved for the making-of featurette section in the last 10 minutes. There is real wonder in the snow leopards’ eventual appearance.

The Velvet Queen is released on 29 April in cinemas.