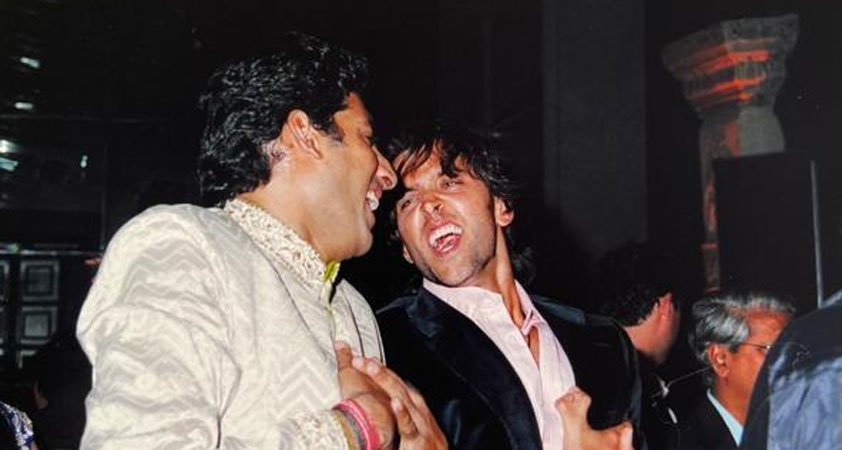 Farah Khan took a trip down nostalgia lane as she shared a filmy picture from her wedding festivities with her followers.

The candid picture, that Farah dubbed “almost vintage,” showed Abhishek Bachchan and Hrithik Roshan dancing together. It was clicked almost two decades ago at Farah’s sangeet function ahead of her wedding to Shirish Kunder in December 2004.

The throwback picture showed Abhishek Bachchan in an ivory-coloured Sherwani and Hrithik in a black suit, paired with a pink shirt. Sharing the picture on her Instagram account on Wednesday, Farah recalled that she was too drunk at her sangeet to remember which song Hrithik and Abhishek were dancing to. She wrote, “Found an almost vintage pic of these 2 boys from my sangeet.. @bachchan & @hrithikroshan dancing up a storm.. can’t remember to which song.. I was too drunk. can you all guess?”

Fans took no time in fulfilling Farah’s wishes and started guessing the song that was being played at the moment the picture was clicked. As both Abhishek and Hrithik had their hands on their hearts in the picture, Bollywood fans were of the opinion that the song must have been about heart. Simi Garewal also wrote, “Something about ‘dil (heart)’??” adding a red heart emoji.

A fan wrote, “Dil dharak na something their hands are on their chest.” Another commented, “Yeh dil deewanaaaaaa hai yeh dil.” Others praised the bromance between Abhishek and Hrithik, who worked together in the 2003 film Main Prem Ki Diwani Hoon and the 2006 movie Dhoom 2. One wrote referring to Dhoom 2, “These two! One of the best duos, best cop and thief.” Another commented, “Friends like family goals.”

Abhishek was recently seen in Dasvi, a social comedy also starring Yami Gautam and Nimrat Kaur, which was released on Netflix and Jio Cinema on April 7. Hrithik will be next seen in Fighter opposite Deepika Padukone and Vikram Vedha, in which he will be seen alongside Saif Ali Khan.