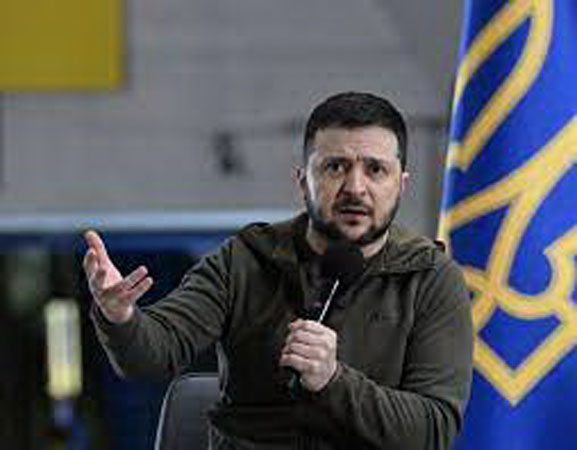 The United States’ top diplomat and defence chief were Sunday set to make their first war-time visits to Kyiv since Russia invaded Ukraine two months ago, with fierce fighting casting a long shadow over Orthodox Easter.

The trip by Secretary of State Antony Blinken and Defense Secretary Lloyd Austin comes as the war enters its third month with thousands dead and millions displaced. Several European leaders have already travelled to Kyiv to meet President Volodymyr Zelensky and underscore their support, but the United States — a leading donor of finance and weaponry — had not sent any top officials so far.

Blinken and Lloyd’s arrival in Ukraine was set to coincide with Easter celebrations in the largely Orthodox country. “Our souls are filled with fierce hatred for the invaders and all that they have done. Don’t let rage destroy us from within,” Zelensky said in a statement to mark the holiday.

The highly sensitive trip by two of President Joe Biden’s top cabinet members comes as Russian forces show no sign of easing their attacks after a missile strike on the southern city of Odessa that killed eight people, including an infant.

“Among those killed was a three-month-old baby girl. How did she threaten Russia? It seems that killing children is just a new national idea of the Russian Federation,” Zelensky said.

He also accused Russia of being a terrorist state, likening behaviour to that of Nazis in the shattered port city of Mariupol, which has been devastated by weeks of intense bombardment.

On Sunday, the United Nations’ Ukraine crisis coordinator Amin Awad called for an “immediate stop” to fighting in Mariupol to allow the evacuation of trapped civilians in the battered city.

“The lives of tens of thousands, including women, children and older people, are at stake in Mariupol,” Awad said in a statement.

“We need a pause in fighting right now to save lives.”

The call came a day after the latest of many attempts to evacuate civilians from Mariupol failed, while an embattled unit of Ukrainian fighters holed up in tunnels under the sprawling Azovstal steel mill appeared in increasingly desperate straits. In a message posted on social media Sunday, Sviatoslav Palamar — deputy commander of the far-right Azov Regiment — said Russian forces continued to rain down fire on Azovstal as its troops attempted to breach the plant’s defences.

“The enemy continues air strikes, artillery from the sea… enemy tanks continue to strike and infantry is trying to storm,” said Palamar.

Mariupol, which the Kremlin claims to have “liberated”, is pivotal to Russia’s war plans to forge a land bridge to Russian-occupied Crimea — and possibly beyond, as far as Moldova. Amid the calls to halt the fighting in Mariupol, the Organization for Security and Cooperation in Europe (OSCE) said it was “extremely concerned” after several of its Ukrainian members were believed to have been arrested in pro-Russian separatist territories in the country’s east.

After evacuating many of their staff following the Russian invasion, several Ukrainian members stayed behind and had been “deprived of their liberty,” the OSCE said on Twitter — adding that the group was using “all available channels to facilitate their release”.

Even as fighting raged across large swaths of the country, Ukrainians took time to observe a solemn Easter. Under the rain at a military position in the eastern town of Lyman, on the frontline, soldiers traded the usual patriotic salutation of “Glory to Ukraine!” for the ritual “Christ has risen!”

In the town’s small Orthodox church, around 50 civilians had braved possible mortar fire to gather to pray from dawn. Artillery fire could be heard throughout the singing of the psalms.

“If we make the wrong choices then darkness will ruin us, as darkness is destroying us during this war,” the priest said in his sermon.

Elsewhere on the frontline, in the eastern city of Severodonetsk, Ukrainian troops had hidden their small stock of supplies under a bridge after they were hit by Russian mortar rounds in the night.

Along with water and Coke bottles, Kalashnikovs and cereal bars, three large Easter breads covered in icing and sprinkled with multicoloured sugar beads awaited them, after a delivery from their commander. The modest Easter celebrations came just a day after missile struck a residential building in the Black Sea port of Odessa, killing eight people and wounding at least 18, according to Zelensky, who said five missiles hit the historic city.

Russia’s defence ministry said it had targeted a major depot stocking foreign weapons near Odessa, attacks that upended the relative calm the city has enjoyed since the war began. The ministry also charged that Ukrainian special services in Odessa were preparing a “provocation with the use of toxic chemical substances” that could then be blamed on Russia.

Western powers have accused Russia in the past of making such allegations as a cover or diversion for attacks its own forces are planning. The latest fighting followed an announcement earlier this week from a senior Russian military officer who said Moscow aimed to take full control over the eastern Donbas region and southern Ukraine.