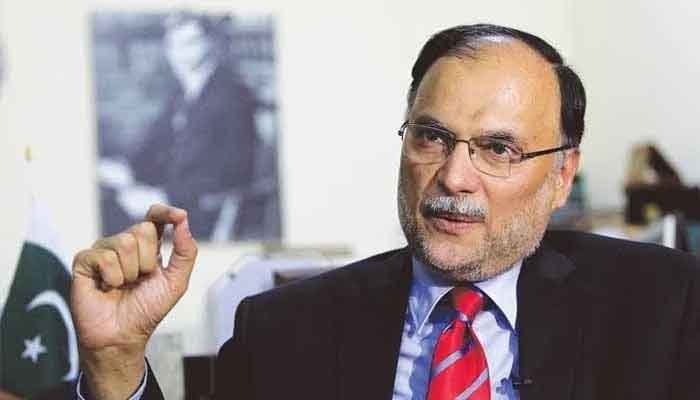 LAHORE: Minister for Planning and Development Ahsan Iqbal said on Sunday that PTI Chairman Imran Khan was “playing” with the country’s national interest to “keep his politics alive”.

Addressing a press conference in Lahore, the minister said that a “constitutional crisis” was ongoing in Pakistan. Iqbal maintained that the former prime minister used to claim that he was “praying the Opposition would move the no-confidence motion against him”.

“Imran Khan had also claimed that the then Opposition had fallen into his trap but later declared the no-trust motion an international conspiracy”, Iqbal said.

“No politician has adopted such a childish behaviour after losing power,” said Iqbal, adding that the former prime minister was putting his political career above the Constitution and state institutions.

“The National Security Committee (NSC) had said twice that there was no mention of a conspiracy in the memo. Imran Khan is playing with the country’s national interest to keep his politics alive,” said the minister. Continuing his attack on the former prime minister, Iqbal said that Imran Khan attacked the country’s foreign policy.

“We should save Pakistan from turning into Cuba or North Korea,” said the minister, adding that the PTI-led government made China upset during its tenure by saying that they had given “expensive loans to the country.”

Talking about relations with the European Union, the minister said that Pakistani immigrants live in the region and that it had granted GSP Plus status to Pakistan. “Yet, Imran Khan started speaking against the EU in his jalsas,” said Iqbal.

The minister was also of the view that Pakistan will have to go to the American markets and also make use of its technology.

“Every developed country sent its human resources to American universities [to make their graduates well-equipped with knowledge and latest technology],” said Iqbal.

The minister also said that the former prime minister had “strained” Pakistan’s ties with the Gulf countries.

“What has become of Pakistan’s image internationally after the world learned that the country’s prime minister was selling the items they gifted to him? You sold the respect of the nation in a market,” said Iqbal, adding that the PTI chairman was working on the agenda of an “enemy state”.

“We will punish those who violated the Constitution,” said the minister.

Iqbal, who is part of the PML-N, said that when the Supreme Court issues a verdict against Imran Khan, then the PTI chairman doesn’t even spare the judiciary and turns his guns towards the courts.

“You want to turn us into a banana republic but you will not be allowed to do so,” said Iqbal.

The planning minister also lashed out at the PTI for the delay being caused to the oath-taking ceremony of the Punjab Chief Minister-elect Hamza Shehbaz.

“A joke is being made in Punjab,” said Iqbal, adding that Pakistan’s largest province was without any leadership.

“This does not happen even in a nascent democracy. A worse administrative crisis has been created in Punjab for three months,” said Iqbal. Taking a jibe at Imran Khan, Iqbal said that the time has come to rid the country of this “ronavirus”.