‘The Flight Attendant’ returns, dizzy and fizzy as ever

* To a surprising and comforting extent, The Flight Attendant's second season, premiering its first two episodes on HBO Max, manages to pull it off 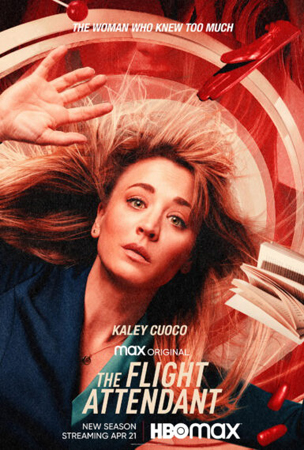 The anxiety of a good show’s second season is always twofold: Will it feel sufficiently the same but different enough?

In the case of The Flight Attendant, that anxiety is heightened because even the first season teetered on the brink of not working. The HBO Max series is a high-stakes thriller grounded by a high-stakes emotional journey and season one managed to accomplish that tonal balancing act while skipping alongside a surrealist premise. There was an enormous relief in watching it make a safe and successful landing; the only accompanying anxiety was knowing it’d surely get renewed and have to do it again.

To a surprising and comforting extent, The Flight Attendant’s second season, premiering its first two episodes today on HBO Max, manages to pull it off. Kaley Cuoco returns as flight-attendant-and-now-also-a-spy Cassie, who relocated to Los Angeles and is nearly a year into sobriety. Cuoco’s screwball, half-manic, overdramatic performance remains key to making this show work; whatever is the opposite of unflappable, that is Cuoco’s Cassie, and the characterization makes for another hilarious and highly flappable experience. The new season adds Mae Martin, Cheryl Hines, Margaret Cho and Shohreh Aghdashloo to the cast, all of whom could be friends or villains – it’s hard to say. Cassie’s friend Annie is back, as is her colleague Megan, whose season-two introduction finds her crouched in a freezing European forest, wearing a ridiculous hat, frantically sawing away at the roots of bright-red poisonous mushrooms. This is the mood of The Flight Attendant at its most essential: absurd setting + absurd circumstances + real emotional grounding + fun costuming + plot? = profit.

Yes, about the plot. There’s both a lot and almost none. In the same way that all the colours of the light spectrum seen at once look to our eyes like no colour at all, this much plot thrown at a TV series has the net effect of nothingness. There are so many twists and surprises and suspicions and reveals that, for the most part, the plot becomes the backdrop rather than the source of forward momentum. It’s a perpetual awareness that many things are happening without ever particularly knowing what, precisely, any of those things mean. This could easily drive you up the wall, and my guess is that for some viewers, it’s going to be alienating. Why spin so much nonsense about doppelgängers and double agents and global conspiracies if there’s too much to follow and arguably too much to care about? What is any of this doing? By the time Cassie and friends are sprinting around on a cliff somewhere, leaping into helicopters to escape some uncertain foe, what are we supposed to even want?

For anyone driven to distraction by the mania of The Flight Attendant’s MacGuffin-littered story lines, there’s not much I can say in the show’s defence beyond “Yes, you’re right.” But the reason the series works so well is that it continually returns to a much simpler, more immediately meaningful set of tensions in Cassie’s life. Fine, yes, she is constantly running pell-mell through pedestrian tourist locales and desperately pawing through acquaintances’ belongings in search of evidence they’re CIA double agents. But, really, the only important questions are, Is Cassie going to stay sober? Is she lying to her friends or her family? Is she generally in control of herself, or are events in control of her? It’s true that The Flight Attendant turns melodramatic-thriller fodder like a helicopter on a cliff into background noise, but to its credit, that’s because it’s making space for a more compelling foreground. The part of that scene that actually matters is the phone call Cassie gets from a family member just as the helicopter rotor begins to spin. Even when events outside of Cassie’s brain fly off into preposterousness, the series nearly always keeps its grip on their effect on her equilibrium.

For all its overblown goofiness, The Flight Attendant retains some hold on artful parallels. Much of the rococo CIA-and-mysterious-baddies story line hinges on a suspicion that someone is framing Cassie by dressing up as her, stealing her identity, and using it to get away with dastardly things. At the same time, a new dream world has replaced the intense, vision like inner life Cassie maintained throughout season one. In lieu of long, perplexed conversations with the man she just found murdered in her bed, Cassie returns again and again to a hall of mirrors where she interrogates different versions of herself. In her mind and in her outside world, it’s just Cassies forever, Cassies all the way down. Is it confusing and overly ornamental and also a not-particularly-subtle way to force Cassie to confront herself? Yes. Does it still work, especially as a means of establishing emotional stakes amid all the chaos? It really does.

Critics received only six of season two’s eight episodes, so that anxiety about whether it will pull off a fitting conclusion has returned once again. I’d like to say it doesn’t actually matter all that much – the show has demonstrated its fun is in the journey rather than the destination. I know, though, that there is no way that will ever appease the viewers who, very reasonably, come to this series with the expectation that some of the plot will at some point make sense. But whatever happens, season two of The Flight Attendant has demonstrated it understands how to build up to an inevitable emotional crash. Whether or not it ultimately achieves another smooth landing, it’s fun to see the show return to dizzying heights.